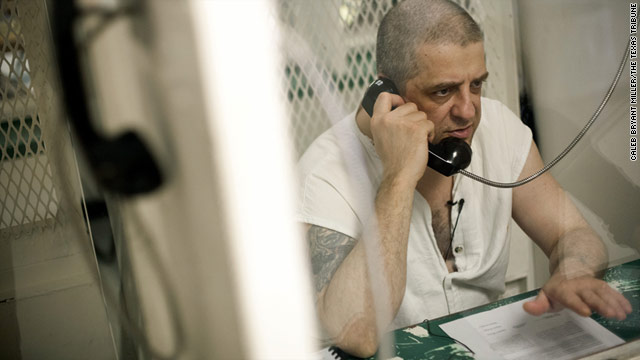 Texas death row inmate Henry "Hank" Skinner was convicted in the murders of his girlfriend and two sons.
STORY HIGHLIGHTS

Washington (CNN) -- The Supreme Court has given another legal reprieve to a Texas death row inmate who says DNA testing of crime scene evidence will prove his "actual innocence."

The justices by a 6-3 vote on Monday said Henry "Hank" Skinner has a basic civil right to press for analysis of biological evidence not tested at the time of his trial.

It was unclear how the narrow ruling will apply to similar legal challenges.

The decision does not yet get Skinner off death row for the murders of his girlfriend and her two sons, but it gives him another legal avenue to press his claims he did not commit the crimes.

Skinner came within 45 minutes of lethal injection nearly a year ago before the justices stepped in and agreed to hear his constitutional claims.

Writing for the majority, Justice Ruth Bader Ginsburg said Skinner has won only a limited victory in his lawsuit against the state.

"Success in the suit gains for the prisoner only access to the DNA evidence, which might prove exculpatory, inculpatory, or inconclusive," she said from the bench. "In no event will a judgment that simply orders DNA tests necessarily imply the unlawfulness of the state's custody."

Skinner's supporters had said that if he lost this appeal, an innocent man could be put to death. The state argued he was not entitled to testing of evidence that was not analyzed before his 1995 trial.

Federal appeals courts have split on the issue in recent years.

Skinner, 48, was convicted of the New Year's Eve 1993 killings of his live-in girlfriend and her two adult sons in the Texas Panhandle town of Pampa. He strongly denies any involvement and claims retesting would prove his innocence and determine the real killer.

Skinner, in an exclusive interview last fall from death row at the Polunsky Correctional Institution in Livingston, told CNN Correspondent Kate Bolduan his request was simple: "All the district attorney has got to do is turn over the evidence and test it, and let the chips fall where they may. If I'm innocent I go home, if I'm guilty I die. What's so hard about that?"

Skinner admits he was at the crime scene at the time of the crimes, but claims he was passed out on the couch from a combination of vodka and codeine.

A female friend of Skinner's who lived four blocks away testified at his trial that he walked to her mobile home and told her that he may have kicked Twila Busby to death, although evidence did not show she had been kicked. The neighbor has since recanted parts of her testimony.

Authorities followed a blood trail from the crime scene to the female friend's home and found Skinner in the closet, authorities said. He was "wearing heavily blood-stained jeans and socks and bearing a gash on the palm of his right hand," according to the Texas attorney general's summary of the case.

Also found stabbed to death were Elwin "Scooter" Caler, 22, and Randy Busby, 20, both of whom were developmentally disabled. Skinner's attorneys have in the past presented what they call compelling evidence pointing to another man -- an uncle of the victims -- who may have committed the murders.

The focus of this appeal was not on the specific details of the crime, but strictly on whether inmates can go around the usual federal appeal route to make what is called a "1983" claim, named after part of the civil rights statute dealing with alleged due process violations at trial. The traditional venue is a "habeas" proceeding, where a variety of issues over an inmate's conviction and incarceration can be raised.

Prosecutors argue having a second judicial forum to press one's appeal would tie up the courts, delay justice, and give inmates free rein to "game" the system. Defendants say the current route to get post-conviction DNA is so narrow that they deserve a chance to make these larger, more basic constitutional arguments apart from the fact-specific requirements of a habeas hearing.

Ginsburg's opinion captured the support of two conservative colleagues -- Chief Justice John Roberts and Justice Antonin Scalia -- who traditionally have been less supportive of claims by capital inmates. Perhaps in order to get their vote, Ginsburg's ruling was not broad in scope.

"We express no opinion on the ultimate disposition of Skinner's federal action," she wrote, adding that a previous high court ruling on post-conviction access to DNA tests "severely limits" a state prisoner's options. That prior case "rejected the extension of substantive due process to this area, and left slim room for the prisoner to show that the governing state law denies him procedural due process."

Texas has executed more prisoners than any state since 1976, when the high court allowed executions to resume. Two have taken place so far this year.

Recently, questions have swirled in Texas regarding the 2004 execution of Cameron Todd Willingham for a fire that killed his three daughters, and allegations he was not guilty.

Last March, Gov. Rick Perry issued a posthumous pardon for Timothy Cole, who was serving a 25-year sentence for aggravated sexual assault when he died in prison from an asthma attack. After his death, DNA tests established his innocence, and another man confessed to the crime.

"It's a win-win for the justice system. If he turns out to be guilty, we have the certainty of that fact with objective DNA science prior to the time that we carry out the ultimate punishment," said Nina Morrison, a senior attorney with the Innocence Project, which is helping appeal the Skinner sentence. "And if he's not guilty, obviously that's something that we, and surely the state, would want to know prior to the time that an irrevocable penalty of execution is carried out."

Her group says 258 people nationally been exonerated through post-conviction testing -- people who were found guilty by a unanimous jury and sent to prison or death row, but were later exonerated or proven innocent by DNA.

The ruling issued Monday offered little guidance for such cases.

There was no immediate reaction from the state.

The action corrects the 5th U.S. Circuit Court of Appeal's "fundamental misunderstanding of this important principle," he said in a written statement. "As Justice Ginsberg states in her majority opinion, there is no reason to fear that lawsuits like Mr. Skinner's will overwhelm the federal courts. The high court's ruling will simply make it possible for Mr. Skinner to vindicate his due process rights in federal court, a right long enjoyed by prisoners in other parts of the country.

"We look forward to making our case in federal court that Texas's inexplicable refusal to grant Mr. Skinner access to evidence for DNA testing is fundamentally unfair and cannot stand."

The case now returns to a lower federal court, and it is unclear what legal steps state prosecutors will now take to give Skinner the DNA testing he has long fought.