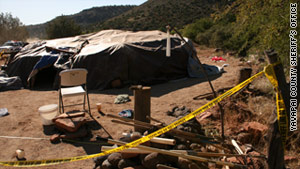 Camp Verde, Arizona (CNN) -- Jurors in the trial of self-help guru and speaker James Ray, accused of three counts of manslaughter in a 2009 Arizona sweat lodge ceremony, heard a recording Wednesday in which he previewed the intense ceremony and told participants how it would be a "death and rebirth experience."

Before the October 2009 ceremony at a retreat center near Sedona, Ray told participants it would include the most "intense heat you've every experienced in your life. You will feel like you are going to die."

The author described the ceremony as a sacred way for participants to rid themselves of "all the things that you've allowed to be your truth and have caused you to sell yourself short."

He promised each would emerge as a "different person." The participants would then enjoy a celebratory dinner and share personal breakthroughs in an evening session.

But something went horribly wrong. Three people died during or after the purification ceremony and Ray was charged in their deaths.

The defense told jurors in opening statements last week the three died in a "tragic accident -- not a crime." Prosecutors maintain Ray psychologically pressured participants to remain in the lodge even when they weren't feeling well, contributing to their deaths.

In the recording, Ray told participant, who paid up to $10,000 each to attend the event, that as "true spiritual warriors" and their "altered state" they would endure heat so intense it would make it feel like their skins was coming off of their bodies.

"I will be right there with you," he said.

"You will have to get to a point where you surrender to death," Ray said. "When you are going into the lodge symbolically you are going back into the womb of mother earth."

Prosecutors argue that the lodge -- made of willow trees and branches, and covered with tarpaulins and blankets -- was heated to perilously high temperatures, causing the participants to suffer dehydration and heatstroke.

During his recorded talk, Ray repeatedly told participants to drink plenty of fluids.

But Dennis Mehravar testified he had not much to drink in the previous 36 hours and had only a short time to hydrate. And the real estate salesman from Canada said no physical examination or medical information was required before the event.

Another participant, Nell Wagoner, told jurors she saw no preparations by Ray's staff for any medical emergencies.

Ray told participants that if conditions became unbearable, they could leave when the lodge flap was opened.

He promised a transcending experience.

"You will be in such an altered state," Ray said. "You may see visions. It's a great opportunity to explore your own consciousness."

Wagoner, a gynecologist from Juneau, Alaska, and a participant in the program, testified she was concerned that a man who had been burned on his hand inside the lodge was allowed back in. Ray said a nurse would assist the participant, she testified.

But Wagoner also said she did not perceive participants in the lodge's dark interior needed medical attention. If they had, she would have provided assistance, the doctor told jurors.

Wagoner said she would not have entered the lodge if she thought there was a possibility she might die.

Wagoner testified that Ray never stopped anyone from leaving the sweat lodge. She acknowledged under cross-examination that water and fortified drinks were available to participants.

Earlier, Jennifer Haley, who served as a volunteer at the 2009 event near Sedona, took the stand for the fourth day Wednesday to talk about how she and other "Dream Team" members tried to help ceremony participants.

Under cross-examination, Haley acknowledged that, in a police interview on the day of the ceremony, she suggested the deaths and injuries were an innocent accident and that perhaps something on rocks inside the lodge contributed to the injuries.

The heat in the sweat lodge was maintained by heated rocks brought in by "firetenders" during regular intervals in the ceremony.

Ray is charged with three counts of reckless manslaughter in connection with the October 2009 incident at the spiritual retreat. If convicted, he could face up to 10 years in prison on each count.

Wagoner said she told detectives that they should look at carbon monoxide levels and dehydration among participants.

Haley also said ceremony participants had been warned about how hot the lodge would be and that Ray never told anyone who left during the event they would have to return. The man who burned his hand voluntarily returned to the lodge.

Kirby Brown, 38, of Westtown, New York, and James Shore, 40, of Milwaukee, died the night of the event. Volunteer Lizbeth Marie Neuman, 49, of Prior Lake, Minnesota, died nine days after the ceremony.

The so-called sweat lodge -- which was 5 feet tall and 23 feet wide, and built to accommodate up to 75 people -- was the site of a purification ritual for participants modeled on Native American customs.

Ray encouraged participants to hydrate throughout the retreat and warned them the sweat lodge would be very hot, his attorney has said. Participants signed a release form saying that the retreat activities could include a sweat lodge with enclosed spaces and high temperatures, Luis Li said in his opening statement last week.

The defense has asserted that the symptoms exhibited by the victims are consistent with poisoning from an unknown toxin.