Author of pedophilia book pleads no contest, gets probation

By Aletse Mellado, In Session 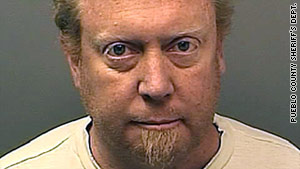 (CNN) -- The man extradited to Florida for writing, publishing and selling a controversial book considered a "how-to" for pedophiles pleaded no contest to criminal charges in exchange for two years' probation, authorities said Thursday.

Phillip Greaves was arrested in his home state of Colorado in December and extradited to Polk County, Florida. Polk County Sheriff Grady Judd said at the time his detectives were able to establish jurisdiction in the case by conducting an undercover operation, buying a copy of the book "The Pedophile's Guide to Love and Pleasure: A Child-Lover's Code of Conduct," through the mail.

Greaves even autographed it. Police paid $50 for the book, which they received on December 8.

Greaves and his book gained national attention last year after Amazon.com defended selling the book on its website despite angry comments and threats of boycotts from thousands of people. The book was removed from the website in early November.

Officials said the book talks about safe sex and avoiding injury to children, grooming and preparing children for sex and teaching children how to lie to their parents. Judd said last year Greaves' book outlines a "code of ethics" that shows pedophiles how to look for the most vulnerable children.

Greaves told reporters after his arrest the book could be used as a guide to rehabilitating pedophiles and instead of teaching them how to avoid arrest, teaches them to avoid illegal actions.

Asked if he is a pedophile, Greaves said, "I only have sex with grown-ups." He said he has no children and "I don't keep children around my house."

On Thursday, as he was leaving jail, Greaves told CNN affiliate WESH he still supports the sale of the book.

"I don't think I did anything wrong," he said. "It backfired on me."

According to the pre-arranged plea deal announced in court Wednesday, Greaves agreed to plead no contest as charged and will serve two years' probation. While the plea does not require Greaves to register as a sex offender, he is required to continue mental health counseling, said Chip Thullbery, spokesman for the prosecutor's office.

"We believe this agreement accomplishes our objectives: to see he does not do it again and give a warning to others who may want to create such materials," Thullbery said. "If he publishes this book again or sells it further, he would be subject to re-arrest." If that occurs, Greaves could be sentenced to the maximum for the charge: five years in prison.

However, while the probationary terms apply to Florida, Thullbery did not know what action, if any, Florida prosecutors could take if Greaves sells the controversial book in another state where it could be considered legal.

"We'll have to address that issue at that time," Thullbery said.

Greaves will be allowed to serve the probationary term in Colorado.

Judd has previously publicly said his office's investigation into Greaves and his subsequent arrest was prompted by media reports on the book, including one by CNN's "AC360," and the public outcry.