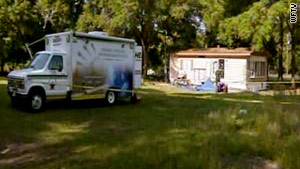 Authorities said Seath Jackson was lured to a home Sunday in Ocala, Florida, where he was beaten and shot.
STORY HIGHLIGHTS

See more about this report from CNN affiliates WESH , WFTV and watch "Dr. Drew" tonight on HLN at 9 ET for more on why revenge and hatred could possibly lead someone to commit a crime like this.

(CNN) -- The suspected ringleader of a group arrested for allegedly luring a 15-year-old boy to a Florida home, shooting him several times, burning his body in a fire pit and putting the remains into paint cans, could face the death penalty if convicted, his attorney said Thursday.

But defense attorney Charles Holloman added, "We are not admitting any guilt at this time."

Michael Bargo, 18, appeared in court Thursday where he was denied bond in the killing of Seath Jackson, an act that allegedly involved five other people Sunday in the central Florida city of Ocala, according to a statement from the Marion County Sheriff's Office.

Holloman said Jackson and Bargo had dated the same girl, though not at the same time.

Jackson at one point went to Bargo's home yelling and screaming in the front yard, threatening to burn down Bargo's house, Holloman added. CNN cannot independently confirm that statement.

Prosecutors say two females later lured Jackson to the home, where he was beaten with a wooden object. He was then shot several times with a .22 caliber gun, authorities said.

As the wounded teen attempted to flee, he was tackled and shot again, according to the sheriff's statement. His body was allegedly placed in a sleeping bag and burned in a fire pit outside the home.

His ashes were placed into several paint containers and thrown into a large garbage can, authorities said.

Authorities said they learned of the alleged plot from a member of the group who admitted witnessing the killing.

Four adults and two minors have been charged in connection with the death.

James Haven, 37, faces charges of accessory to the crime for allegedly helping to dispose of Jackson's remains and driving one of the suspects out of the area to avoid arrest, authorities said.

Sheriff's department documents gave little information on what led to the killing other than brief statements by suspects about a dispute and a growing hatred.

Divers on Wednesday found three paint buckets in a water-filled rock quarry that are suspected of containing the victim's remains, authorities said.

The contents of the buckets were delivered to a forensic specialist at the University of Florida in Gainesville to determine if the ashes and bone fragments match those of Jackson.

Haven, who is not represented by an attorney, posted a $10,000 bond and was released Wednesday morning.

The two minors involved in the case are currently being represented by public defenders, who could not comment.

A jury trial that was expected to take place on May 2 has been postponed, said Holloman.

Soto's public defender, Bill Miller, would not comment on the case. Ely is not represented by an attorney.

Bargo also had a restraining order issued against him, forbidding contact with a person named Calib, who is not connected to the Jackson case, Holloman said.