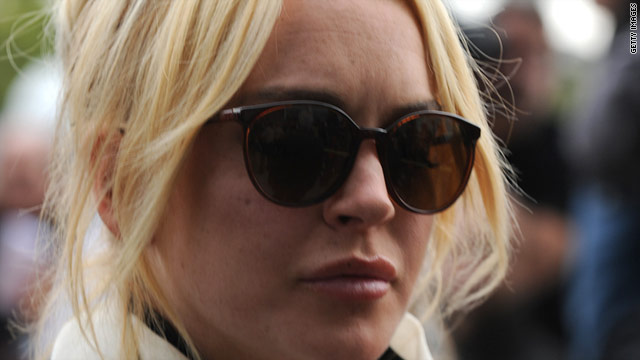 Lindsay Lohan was bailed out of jail Friday after she was sentenced for violating her probation.
STORY HIGHLIGHTS

Los Angeles (CNN) -- Lindsay Lohan, accused of stealing a necklace, spent five hours in custody before posting a $75,000 bond Friday evening after a judge sentenced her to 120 days in jail for violating her drunk driving probation.

Her release from Los Angeles County's Lynwood Correctional Facility capped a long day that included a victory for the actress when a judge reduced the felony grand theft charge to a misdemeanor.

Lohan will remain free on bond while her lawyer appeals the jail sentence for the probation violation, but she must immediately start serving 480 hours of community service, Los Angeles County Superior Court Judge Stephanie Sautner said.

The community service, includes 360 hours at a downtown Los Angeles women's center, which Judge Sautner suggested might cause Lohan to behave better after seeing "how truly needy women and women who have fallen on real hard times have to live."

She must complete another 120 hours of community service at the Los Angeles County morgue.

The judge ruled Friday that the necklace theft case against Lohan will go forward to trial, but the felony charge was reduced to a misdemeanor.

"I'm going to give her an opportunity," Sautner said.

Sautner did not buy the defense argument that Lohan accidentally walked out of a Venice, California, jewelry store wearing a necklace that later appeared around her neck in photographs taken five days later.

"If in fact it was an accident, she could have called the store back," Sautner said.

Defense attorney Shawn Holley argued that Lohan was busy and scattered when she was at the store and absent-mindedly walked out with the necklace.

"It's undisputed that Ms. Lohan walked out of the store with the necklace on," Holley said. The prosecution must show she had "specific intent to permanently deprive the store of that necklace."

While Holley conceded that Lohan "did not rush to return the necklace," but it just "makes her not a very considerate or courteous person."

"The fact that she may not have been a courteous or considerate person doesn't make her a thief," Holley said.

"I see the intent here and the level of brazenness to say 'Let me see what I can get away with here,' " Sautner said.

A police detective testified that Lohan's assistant handed the necklace to a police officer after learning through a website posting that police had obtained a search warrant hours earlier to search for it in her home.

Prosecutor Danette Meyers argued that "it doesn't take a rocket scientist" to realize Lohan returned the necklace to police because she knew her home was about to be searched.

Lohan's trial date was set for June 3, but she must return to court for a hearing May 11, the judge said.

A misdemeanor could still result in up to a year in prison for Lohan.

Before delivering the good news to Lohan about the reduction of the charge, the judge addressed her much-publicized misbehavior.

"She thumbs her nose at the court," Sautner said, referring to an incident with another judge last year. "She walks into court with 'F U' on her fingernails. I don't know what that means unless it has 'I am' before it."

The jeweler who accused Lohan of stealing the gold and diamond necklace testified Friday that she had not gotten any money from selling the security camera video of the actress in her store.

Kamofie and Company owner Sofia Kamen was the second witness called by the prosecution in the preliminary hearing.

Holley used the the store's licensing of the video, for a reported $40,000, to question Kamen's motives in accusing Lohan of theft.

All of the money from the video licensing went to publicist Christopher Spencer, who Kamen said she fired last month because he was negotiating deals for the store that she was not interested in, she testified.

Kamen said that she realized the necklace was missing 10 minutes after the actress left the store last January.

She wasn't closely watching Lohan, even though there was another incident four days earlier in which the actress almost walked out wearing a diamond earring.

"We thought it was an accident," Kamen said. "We weren't thinking that she would take it."

The first prosecution witness was Tinelli Comsooksri, a store employee who was working the day of the earring incident.

As prosecutor Meyers held the infamous necklace, now known as "People's Exhibit 2," Kamen testified that it was priced at $2,500 although it cost the store only $850. She explained that retail jewelers routinely triple the wholesale price.

The value of the necklace was a crucial issue for Lohan for the felony grand theft charge to be reduced to a misdemeanor. Shoplifting offenses are charged as petty theft if the property taken is valued at less than $950.

Lohan has been in court nine times in the past year, mostly for hearings related to probation violations for her 2007 drunk driving case.

She did a short stint in jail last year, but she also checked into substance abuse rehab twice under court order.