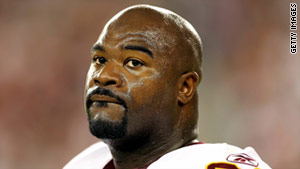 A defensive tackle for the Washington Redskins, Haynesworth, 29, allegedly stuck a credit card down the front of a server's dress and fondled her breast, according to prosecutors. Court papers do not identify the waitress but say the incident happened around 2 a.m. on February 13 at a rooftop lounge atop the W Hotel.

An indictment was returned Tuesday by a grand jury in Superior Court of the District of Columbia. An arraignment has been scheduled for May 10.

According to a news release, Haynesworth could face up to 180 days in jail and a maximum fine of $1,000 if convicted.

Haynesworth's defense attorney, A. Scott Bolden, called the indictment "disappointing, regretful and a difficult case for the government to prove."

"The indictment is merely a charge, not a conviction," Bolden said. "And in fact, my client maintains his innocence because he is innocent. We will vigorously continue to fight these charges, and I fully expect him to be exonerated from any wrongdoing."

Earlier this year, Haynesworth also was charged with assaulting a motorist after a traffic incident in Reston, Virginia.