Jury hears tale of murder-for-hire plot -- or was it reality TV plot? 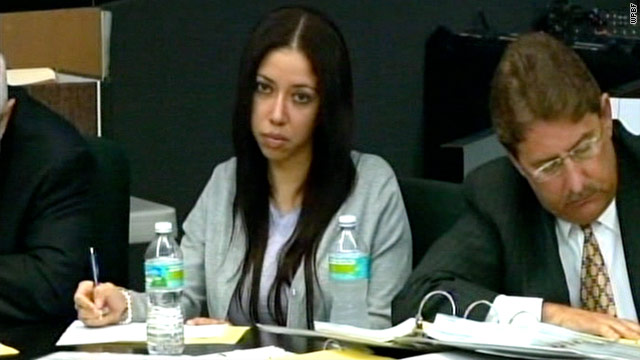 Dalia Dippolito's attorney argued that her sense of reality was "blurred" in her quest to get on television.
STORY HIGHLIGHTS
RELATED TOPICS

(CNN) -- In a week of testimony, a Florida jury has heard prosecutors and police describe what they say was a woman's scheme to hire a hitman to kill her newlywed husband, countered by the defense argument that the woman and her husband were using the murder-for-hire pretext to get on reality TV.

Testimony has included references to a police videotape featuring a "hitman" who was actually a cop and the woman's taped statement that she was "5,000% sure" she wanted to pay someone to kill her husband of six months.

On Friday, the jury heard videotaped testimony from a man who said he was the woman's lover and that he was the tipster who alerted police in the case, adding, "I didn't think it was going to go this far."

Dalia Dippolito, now 28, is on trial in Palm Beach County for solicitation to commit first-degree murder. If convicted, she could spend up to 30 years in prison.

The prosecution alleges that Dalia Dippolito wanted to get her husband's money at any cost. She resorted to the hitman plan, they said, after failed attempts to plant drugs on husband Michael Dippolito, which would cause a violation of his probation and land him back in jail.

In the trial, authorities described how they set up an elaborate sting, which included the surveillance video purportedly featuring the defendant talking with the hitman-undercover cop. Police said they even staged a crime scene to make it appear that husband Michael Dippolito had been killed -- only to have authorities eventually tell Dalia Dippolito that her husband was alive and that they had video footage of her trying to arrange his death.

Friday's taped testimony by the tipster, Mohammed Shihahdeh, included questions by prosecutors as well as a cross-examination by Dalia Dippolito's defense lawyer. It was videotaped on March 7, as Shihahdeh was in Jordan by the time the trial kicked off.

An aspiring actor and the owner of two convenience stores, Shihahdeh testified that he talked with Boynton Beach police after he became convinced that Dalia Dippolio was serious about her intention to have her husband killed.

He said that he talked with law enforcement in hopes of protecting his lover from Michael Dippolito, whom she had claimed was abusive, as well as "thugs" she had come in contact with.

"I just tried to help someone out to stop it," Shihahdeh said. "I didn't think it was going to go this far."

His revelation set off an investigation that included planning between Dalia Dippolito and an undercover officer who said that, for a price, he'd arrange to kill her husband of six months.

In November 2009, Boynton Beach police released a video that they had secretly recorded. In the video -- which has been referenced in this week's trial by the prosecution and defense, but not yet shown -- Dalia Dippolito sorted out logistics, payment plans and other details with the would-be hitman.

"There's no changing. I'm determined already," she said on the video, which has been obtained by the media, including CNN. "I'm positive -- 5,000% sure."

In the video, Dalia Dippolito said she'd pay some upfront money and insisted she's "good for" the remainder, once the job was complete.

Defense attorney Michael Salnick spent part of three days grilling the would-be victim, Michael Dippolito, portraying him as a liar with a shady past.

The husband -- who spent two years in prison and was put on probation for 28 years after pleading guilty to fraud charges in 2003, according to the Florida Department of Corrections -- admitted in court that he may have understated his wealth to his probation officers. But he strongly denied that he had ever schemed with Dalia for celebrity's sake, adding that he felt he was happily married and that he showered his wife with jewelry and other gifts.

"We're not here because of me," an irritated Michael Dippolito said Thursday.

If her aim was to score a reality-TV deal, prosecutors questioned why she had made no video of the scheme -- noting that the only video produced on the matter came from investigators.

But her attorney, Salnick, contended that Dalia Dippolito's sense of reality was "blurred" and that she was motivated mostly by a desire to get on television.

"Reality TV often glorifies bad behavior, appealing to the gullibility of people," Salnick said in opening arguments Tuesday. "The contract killing of Michael Dippolito was never real. It was a stunt, a hoax, a plan that Michael Dippolito -- whether he admits it or not -- (hoped) to capture of someone on reality TV."