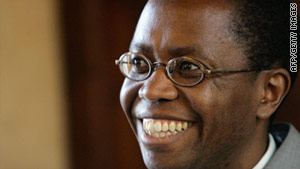 Ignace Murwanashyaka (pictured in 2005) and Straton Musoni are on trial in Stuttgart, Germany.
STORY HIGHLIGHTS

(CNN) -- Two Rwandan rebel leaders went on trial in Germany on Wednesday on charges of crimes against humanity, war crimes and being members of a foreign terrorist group, a court statement said.

Ignace Murwanashyaka, 47, and Straton Musoni, 49, are alleged members of the Democratic Forces for the Liberation of Rwanda (FDLR). They are on trial at the Stuttgart high court.

The rebel group mainly comprises Hutu extremists who fled to Congo after taking part in the 1994 Rwandan genocide.

"They stand accused of controlling the strategy and tactics of the FDLR from Germany," the court said. "In this capacity they're supposed to have been responsible for 26 crimes against humanity and 39 war crimes" carried out by their militias in the Democratic Republic of Congo in 2008 and 2009.

"This trial will be the first in Germany under its Code of Crimes Against International Law, adopted in June 2002, which integrates the crimes of the Statute of the International Criminal Court (ICC) into German criminal law and allows German courts to investigate and prosecute them wherever they are committed in the world, because of their sheer gravity," Human Rights Watch said.

A third alleged rebel leader, Callixte Mbarushimana, has been transferred to the International Criminal Court to face charges of war crimes and crimes against humanity.

Mbarushimana was arrested in Paris in October under an ICC warrant involving allegations of mass rape and other crimes committed in the Democratic Republic of Congo.

He is charged with 11 counts of crimes against humanity and war crimes including rape, gender-based persecution and property destruction by his group in 2009, an ICC statement said in October.

The ICC statement blamed the group for instigating war in Congo as part of its efforts to topple the government in neighboring Rwanda.

Mbarushimana left Rwanda in the aftermath of the war and worked for the United Nations until he was dismissed in 2001 when it was revealed that he was the subject of an investigation by the United Nations' own criminal tribunal for Rwanda.

In 2005, CNN spoke with Mbarushimana in France, where he had refugee status. He maintained his innocence.

"I am not afraid of justice. What I am afraid of is injustice, like what is taking place in Rwanda for instance, where people are not really tried properly," he said.

The ICC said Mbarushimana "has held senior positions in the political leadership of the FDLR" since 2004.

The ICC, seated at The Hague in the the Netherlands, describes itself on its website as "the first permanent, treaty based, international criminal court established to help end impunity for the perpetrators of the most serious crimes of concern to the international community."