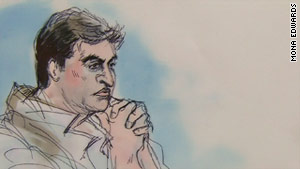 Irfan Khan and four members of his family -- led by his father, an imam in south Florida -- are facing a four-count indictment.
STORY HIGHLIGHTS
RELATED TOPICS

Los Angeles (CNN) -- Irfan Khan, a Florida limo driver accused of conspiring with his imam father and brother to funnel tens of thousands of dollars to the Pakistani Taliban, was denied bail Thursday in federal court.

Khan, 37, was also ordered to be transferred to Miami, where the indictment against him originated. Khan resides in Miami but was arrested in El Segundo, California, over the weekend. His transfer to Miami has yet to be scheduled.

Khan and four members of his family -- led by his father, an imam in south Florida -- are facing a four-count indictment charging them with providing financing and other material support to the Pakistani Taliban, which the U.S. government has designated as a foreign terrorist organization. A sixth person also is named in the indictment.

In denying bail for Khan, U.S. Magistrate Judge Paul Abrams said he "reluctantly" agreed with prosecutors that Khan is a flight risk and a danger to the community.

Khan wore a white prison jumpsuit to court Thursday, and was intently whispering and looking over documents with his federal public defender, Jill Ginstling.

Ginstling vehemently argued Khan is a man of simple means and a married father of two young children. He poses no threat to flee, she argued.

She also strongly implied Irfan Khan was paying for the alleged sins of his father.

"They should not hold someone responsible for the things his father said," Ginstling told the court.

She said her client sent money wires totaling less than $3,500 to Pakistan, implying this was hardly the means to support terrorism.

But federal prosecutor Chris Grigg argued Khan and his alleged co-conspirators provided money that the Pakistani Taliban could have used to buy explosives and weapons for various attacks.

"It's the money given to groups like the Pakistani Taliban that allow them to conduct their operations," Grigg said.

"This is a group that is active now," Grigg added, even citing a CNN.com article about the Pakistani Taliban carrying out a revenge attack for the death of Osama bin Laden.

Grigg also argued a network of family members in Florida and Pakistan could help him flee the country.

Khan was arrested at an El Segundo hotel, and his lawyer said he was on a six-week business trip and was transitioning from being a limo and cab driver to the information technology business.

The three other people named in the indictment now reside in Pakistan: Amina Khan, who is the daughter of Hafiz Khan; her son, Alam Zeb; and Ali Rehman. They remain at large, authorities said.

All the defendants are originally from Pakistan, prosecutors said.

Hafiz Khan is the imam at the Miami Mosque, also known as the Flagler Mosque, in Miami. His son, Izhar Khan, is an imam at the Jamaat Al-Mumineen Mosque in Margate, Florida.

The indictment does not charge the mosques with any wrongdoing, prosecutors said.

The case isn't linked to the May 2 killing of al Qaeda leader Osama bin Laden in Pakistan, two U.S. officials have said. The charges relate to alleged crimes committed between 2008 and 2010.

The indictment describes a number of occasions when Hafiz Khan transferred money to Pakistan.

The court documents recount several conversations between Hafiz Khan and the other defendants in which Hafiz Khan allegedly called for attacks against the Pakistani government and asked whether money had been delivered to the Pakistani Taliban.

Hafiz Khan is accused of building a madrassa in Pakistan's Swat Valley that provided shelter for members of the group, the indictment states.

The term "madrassa" traditionally refers to any Muslim school, but in recent years news stories about madrassas radicalizing Islamic students cast the word in a negative light.

Hafiz Khan operated and controlled a madrassa to shelter members of the Pakistani Taliban and "to train children to become military fighters for the mujahedeen," U.S. Attorney Wifredo A. Ferrer said last weekend.

He said authorities are aware of several unindicted co-conspirators in the United States and Pakistan.

The Pakistani Taliban represents a confederation of Taliban groups in northwestern Pakistan, where they are based, according to Bill Roggio, a military affairs analyst who is managing editor of The Long War Journal.

Those fighters attack targets in Pakistan and neighboring Afghanistan.

The Pakistani Taliban, which is headquartered in Quetta, is separate from the Afghan Taliban, which has been focused on re-establishing the Islamic emirate in Afghanistan.

But both groups swear allegiance to Taliban leader Mullah Omar and have close ties to al Qaeda, Roggio said.