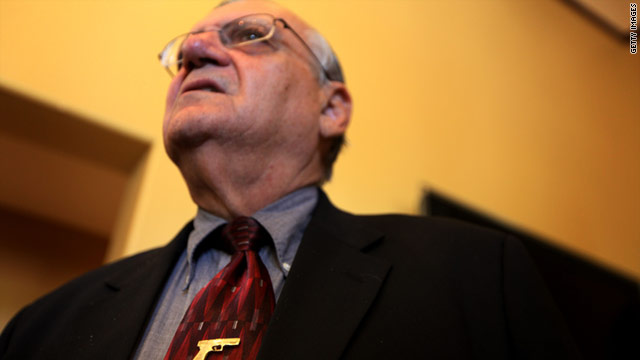 For more on this story, see CNN affiliate KTVW

(CNN) -- Authorities in Arizona have arrested three employees of a sheriff's office known for its tough stand on illegal immigration, accusing them of aiding human traffickers and drug smugglers.

"That a deputy sheriff would provide information and associate with these drug and human traffickers is despicable," Arpaio told reporters.

Deputy Alfredo Navarrette, who had been a member of a unit targeting human smuggling, faces felony charges connected to human smuggling, money laundering and participating in a crime syndicate, Arpaio said.

"He admitted actually going to our command centers to obtain information to pass on to the drug traffickers and the smugglers," Arpaio said, noting that authorities found two illegal immigrants in Navarrette's home when they served a search warrant Tuesday morning.

The two detention officers who were arrested -- Sylvia Najera and Marcella Hernandez -- are accused of money laundering and having connections with drug-trafficking organizations. Hernandez had more than $16,000 in her purse when she was taken into custody, Arpaio said.

Maricopa County Attorney Bill Montgomery praised the sheriff's office for its handling of the matter and pledged to hold the officers accountable.

"This wasn't swept under the rug. The cooperation that we received from the sheriff's office was complete and forthright," he told reporters.

"No one's above the law, and apparently no one is beyond the reach of drug-trafficking organizations in Mexico," he added.

Arpaio drew national attention and earned the nickname of "America's toughest sheriff" for his stance on illegal immigration, among other things.

Many of his prisoners are housed in tents and forced to wear pink underwear, and he once boasted of feeding them on less than a dollar a day per prisoner.

He faces a U.S. Justice Department investigation into whether his policies cracking down on illegal immigrants discriminate against Hispanics.

Earlier this month critics called for his resignation after an audit found he used nearly $100 million designated for jail funds to pay deputies' salaries.

Some activists said Tuesday's arrests are part of a public-relations ploy to clean up the sheriff's office image in the wake of such accusations.