Charges filed in slayings of U.S. airmen in Germany

By The CNN Wires Staff 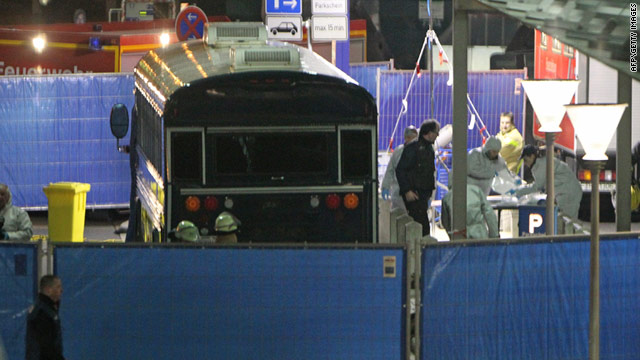 A dead body is carried away from a U.S. military bus after a shooting outside the Frankfurt Airport in Germany on March 2.
STORY HIGHLIGHTS
RELATED TOPICS

(CNN) -- A man accused of killing two United States Air Force servicemen outside an airport in Germany was charged on Tuesday in a formal complaint filed by the U.S. Department of Justice.

The suspect, Arid Uka, also known as "Abu Reyyan," was arrested in March after he allegedly opened fire on an Air Force bus outside Frankfurt International Airport on March 2.

Uka, 21, is accused of shooting and killing Nicholas Alden and Zachary Ryan Cuddeback of the U.S. Air Force and injuring two other servicemen. He is in German custody and will be brought to New York for trial, according to U.S. Attorney Preet Bharara.

According to the complaint filed Tuesday, Uka shot Alden in the head before boarding the bus and shooting Cuddeback. He then continued to fire, injuring two other servicemen while shouting "God is great," the complaint said.

When his weapon jammed, Uka ran from the bus and was later arrested by German police, the complaint said.

According to German officials, Uka later confessed to the shooting and said he was motivated to carry out the attack after watching an Internet video he said showed U.S. soldiers raping Muslim women.

Uka is a Muslim from Kosovo who was influenced by radical Islamist websites, German authorities said.

He is being held on five counts, including two counts of premeditated murder of an officer of the United States and one count of attempted murder of officers.