Captured fugitive 'Whitey' Bulger will be taken to Boston 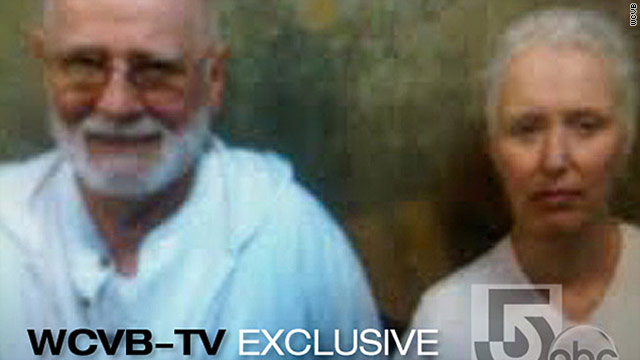 Los Angeles (CNN) -- More than $800,000 in cash, 30 firearms and fake IDs were found at the Santa Monica, California, apartment of fugitive mobster James "Whitey" Bulger, who will be taken to Boston to face a string of charges, including multiple murders, the FBI said Thursday.

Sporting glasses and a white beard, Bulger appeared relaxed Thursday at a Los Angeles hearing. He did not seek bond, according to a spokesman for federal prosecutors.

It was not clear when the longtime fugitive will be transported. The FBI indicated the move may occur Friday. Bulger's girlfriend also was arrested.

U.S. Magistrate Judge John E. McDermott asked Bulger if he was aware of the two existing indictments against him.

"I know them. I know them all. Thank you," he politely answered.

Bulger, a Boston mobster on the lam for 16 years, "appeared to be a guy who was healthy, vibrant and knew what was going on," said assistant U.S. Attorney Robert Dugdale.

Bulger, subject of a $2 million FBI reward, has been living in a Santa Monica apartment and was arrested outside it, the FBI said Thursday. He is charged with 19 counts of murder and a slew of other crimes.

Acting on a tip, members of the Fugitive Task Force staked out the residence Wednesday and arrested Bulger and Catherine Elizabeth Greig, 60, who was inside the home, said FBI Special Agent Richard DesLauriers. Greig is suspected of harboring Bulger.

Neither put up a fight, authorities said. After the arrests, members of the Fugitive Task Force, which included the FBI and police, searched the apartment.

Besides the cash and false pieces of identification, agents found 30 firearms, including pistols, rifles and shotguns and several knives, said Steven Martinez, FBI assistant director in charge in Los Angeles.

The tipster called the FBI's Los Angeles office on Tuesday, and the information led authorities to the apartment, Martinez said. He would not divulge the city from which the call came.

"We were not aware he was in L.A.," Martinez said of Bulger.

Asked by reporters if it was embarrassing to the FBI that Bulger, who reportedly used an alias, and Greig were hiding in plain sight, Martinez said, "I wouldn't say embarrassing. I would say challenging.

"It's not the first time that a fugitive has evaded justice for many years," Martinez continued. "But he was not able to be successful ultimately."

Martinez described Bulger and Greig's apartment as close to the beach. The apartment is near Santa Monica's shopping and tourist strip, an open-air corridor called the Third Street Promenade.

CNN Boston affiliate WCVB said it obtained booking photos of the pair. In one photo, Bulger is smiling.

Federal prosecutors have portrayed Bulger as a violent and dangerous man whose criminal enterprise included gambling, extortion, loansharking, narcotics and the alleged murders of people who got in the way or knew too much.

Tipped off by an FBI agent about an impending racketeering indictment, Bulger disappeared into wanted posters and lore. The search even reached Italy, where a reported sighting of the South Boston crime figure didn't pan out.

The end of the manhunt for one of the nation's most notorious gangsters came within days of the FBI launching a publicity campaign, airing ads about Greig in 14 markets across the country where the couple were known to have ties, authorities said. The arrests were a "direct result" of the media campaign, authorities said.

The tip came in about 8 p.m. PT Tuesday (11 p.m. ET), DesLauriers said. Less than 24 hours later, Bulger -- one of the FBI's Top 10 Most Wanted fugitives and the inspiration for the 2006 Martin Scorsese film "The Departed" -- was in custody.

"At approximately 5:45 Pacific Standard Time (8:45 p.m. ET Wednesday), using a ruse, agents and other task force members lured Mr. Bulger out of his apartment," DesLauriers said. Authorities did not detail what the ruse was. The agents determined Bulger's identity and arrested him "without incident," then went in the house and arrested Greig, DesLauriers said.

In addition to the murder counts, Bulger is charged with conspiracy to commit murder, extortion, narcotics distribution and money-laundering charges, the FBI said. He was an FBI informant before he fled in 1995.

Some of the allegations go back 40 years, and it was unclear Thursday how many potential trial witnesses survive.

The arrest "marks a milestone in an investigation of drug trafficking, murder and corruption by Bulger and his cohorts," said Michael Ferguson, assistant special agent in charge of the Drug Enforcement Agency's Boston field office, standing alongside DesLauriers and other officials at a news conference.

FBI Director Robert Mueller traveled to Boston on Thursday to meet and congratulate staff involved in Bulger's capture. Mueller was an assistant U.S. attorney in Boston in the 1980s, during the height of Bulger's reign.

Bulger -- known to alter his appearance through disguises -- was "considered armed and extremely dangerous," according to his description on the FBI's Most Wanted list. "He has a violent temper and is known to carry a knife at all times."

"He's definitely a legend back there," Jimmy LeBlanc, who lives in California and used to live in Boston, told CNN affiliate KABC-TV. "You've heard all the stories, things he's done, corruption and all that. A lot of people said, 'Oh he's dead,' or maybe they don't want to see him get caught. He might take down the whole FBI if he starts talking."

Sandra Patient of Manchester, New Hampshire, said she was elated and relieved to learn that the man accused of killing her uncle, Arthur "Bucky" Barrett, was in custody. Patient said Barrett was killed after he robbed a bank and Bulger wasn't happy with the amount he was given.

The ad focused on Greig and targeted female viewers around the same age. It described her as loving dogs and other animals and frequenting beauty salons. It said she had worked as a dental hygienist and has had multiple plastic surgeries.

An "avid reader with an interest in history," Bulger was known to frequent libraries and historic sites, the FBI said.

Prosecutors said Connolly was corrupted by his two highest-ranking snitches: Bulger and Stephen "The Rifleman" Flemmi.

Bulger's brother William, former president of the Massachusetts State Senate, had no comment Thursday morning when a Boston Globe reporter approached him at his South Boston home. William Bulger stepped down as president of the University of Massachusetts in 2003 after months of pressure by then-Gov. Mitt Romney. He had accused Bulger of being evasive during congressional testimony about his fugitive brother's whereabouts.