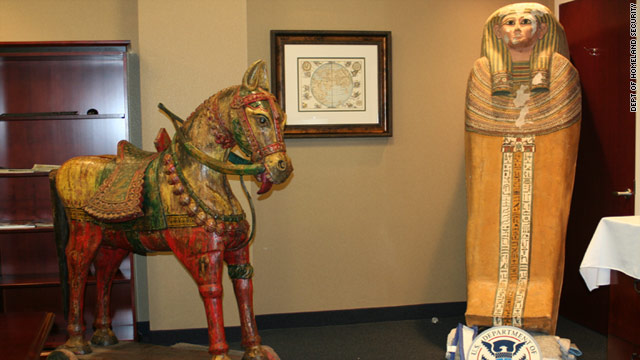 Antiquities recovered from the smuggling ring included a statue of a horse and an Egyptian sarcophagus.
STORY HIGHLIGHTS
RELATED TOPICS

New York (CNN) -- Alleged leaders of an international smuggling ring accused of stealing millions of dollars in antiquities from Egypt and other Middle Eastern countries are now facing federal charges in the United States, authorities said Thursday as they detailed some of the items seized by investigators.

"It is the first time an alleged cultural property network has been dismantled within the United States," James Hayes Jr., special agent in charge of U.S. Immigration and Customs Enforcement, and Homeland Security investigators in New York told CNN.

According to a federal indictment, the Department of Justice charged four men with conspiring to smuggle artifacts and launder money.

Authorities allege the four were part of a sophisticated smuggling operation that crisscrossed the globe, buying antiquities from looters in several countries and then selling them to collectors. The suspects are in custody except for Ramadan, who remains at large, according to a statement from the U.S. attorney's office for the Eastern District of New York.

The arrests and seizures come on the heels of an extensive investigation that lasted more than three years.

"In addition to smuggling cultural property, this case also focuses on significant money laundering activity," Hayes said. "This is notable because the illicit sale of cultural property is the third most profitable black market industry following narcotics and weapons trafficking."

ICE Special Agent Brenton Easter said his team initially was looking for one piece -- a terracotta head uncovered in Iraq in 2000 -- when investigators stumbled upon a multinational network.

Among the antiquities valued at a total of more than $2.5 million that ICE agents confiscated were a Greco-Roman-style Egyptian sarcophagus, a nesting set of three Egyptian sarcophagi, a set of Egyptian funerary boats, and Egyptian limestone figures that date back to 552 B.C.

"As an investigator here I've seen looting from all different regions, but specifically with this case, we actually have information, and we know for a fact, that they were using metal detectors to actually find and locate some of the pits where they would dig and loot."

The antiquities were smuggled in to the United States from the Port of Dubai in the United Arab Emirates, authorities said.

Easter said the recent political upheaval in the Middle East where ancient artifacts abound accounts for an increase in the illegal trafficking of antiquities.

"There has definitely been an escalation in Iraq. There appears to be an escalation in Egypt, but these networks and these rings were pretty well established even prior to what's going on right now in the Middle East," he said.