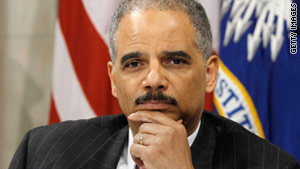 News Corp. is embroiled in a phone hacking scandal in the United Kingdom that forced one of its top executives, Rebekah Brooks, to resign Friday. Now, U.S. legislators say they want to know if the company engaged in that illegal activity in the United States

"There have been serious allegations raised in that regard in Great Britain; there is an ongoing investigation," Holder told reporters in Sydney, Australia.

"There have been members of Congress in the United States who have asked us to investigate those same allegations. And we are progressing in the regard using the appropriate federal agencies in the United Sates."

The office of prominent American attorney Brendan V. Sullivan Jr. confirmed to CNN that he has been retained by News Corp.

How safe are we from cyber attacks?

The FBI launched its investigation into News Corp. after a report that the company's employees or associates may have attempted to hack into phone conversations and voice-mail boxes of September 11 survivors, victims and their families, a federal law enforcement source told CNN Thursday.

News Corp. said Thursday it had no comment on the FBI investigation or the possibility of congressional hearings.

Murdoch said Friday he plans to apologize Saturday amid the burgeoning phone-hacking scandal.

"We are sorry for the serious wrongdoing that occurred," Murdoch will say in an ad that is to appear in newspapers on Saturday. "We are deeply sorry for the hurt suffered by the individuals affected."

The chief executive of News International, the subsidiary that runs News Corp.'s British print media, resigned Friday in the wake of the scandal.

Brooks, who was editor of News of the World at the time of some of the most serious allegations against the newspaper, has been under pressure to step down since the allegations began.

In a statement released through News International, she said: "As chief executive of the company, I feel a deep sense of responsibility for the people we have hurt and I want to reiterate how sorry I am for what we now know to have taken place. ... While it has been a subject of discussion, this time my resignation has been accepted."

Concerns over the hacking of phones belonging to 9/11 victims and relatives appear to be traceable to a story published Wednesday by the Mirror, a British tabloid that includes a section it describes as "gossip gone toxic."

The newspaper cited "a source" who referred to a former police officer who now works as a private investigator. "The investigator is used by a lot of journalists in America and he recently told me that he was asked to hack into the 9/11 victims' private phone data," the source reportedly told the newspaper. The source told the Mirror the request came from News of the World, the newspaper at the center of the phone-hacking scandal in Britain.

"He said that the journalists asked him to access records showing the calls that had been made to and from the mobile phones belonging to the victims and their relatives," the newspaper said.

A federal law enforcement source told CNN Friday that "we don't know whether the (Mirror) story and allegation of hacking is accurate, but we'll do what it takes to get answers and run this to the ground."

The FBI will track down the former police officer, said the source, adding it is likely the agency will work with Scotland Yard over the course of the investigation.

"We'll see where the leads take us," the source said.

Relatives of the victims of the terrorist attacks expressed outrage over the possibility they may have been hacking victims.

Murdoch has one prominent U.S. politician, who was praised for his leadership following the 9/11 attacks, coming to his defense, saying Murdoch may have been unaware of what was going on.

"Give people the presumption of innocence," former New York Mayor Rudy Giuliani told CNN's Candy Crowley in New Hampshire on Thursday. "I think that just how high up it goes is a big question and one we shouldn't be jumping to conclusions about."

Murdoch and Giuliani are longtime friends. Also, a law and lobbying firm in which Giuliani is partner received $100,000 in lobbying fees from News Corp. in 2005, according to congressional disclosure filings.

News of the World, a 168-year-old British newspaper owned by Murdoch, folded over the weekend in the wake of accusations that its reporters illegally eavesdropped on the phone messages of murder and terrorism victims, politicians and celebrities. Police in the United Kingdom have identified almost 4,000 potential targets of phone hacking.

There also were allegations that reporters may have bribed law enforcement officers.

On Wednesday, several U.S. senators sent letters to Holder, asking him to look into concerns that News Corp. violated the Foreign Corrupt Practices Act. The law, enacted in 1977, makes it illegal for a U.S. person or company to pay foreign officials to obtain or retain business.