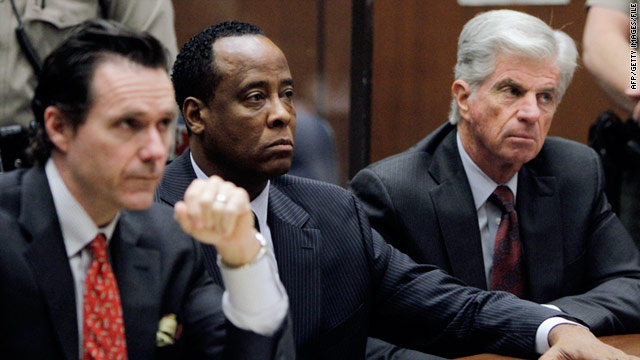 Los Angeles (CNN) -- Defense lawyers in the trial of Michael Jackson's doctor want to shield jurors from commentary by Nancy Grace, the former prosecutor who now hosts a daily show on the HLN network.

Daily commentary by Grace and others during the Casey Anthony trial this summer was "like a final argument by the prosecution," Dr. Conrad Murray's lawyer, Michael Flanagan, said Wednesday.

While the defense has not decided whether to ask that the jury in the Murray trial be sequestered, Los Angeles County Superior Court Judge Michael Pastor hinted at a hearing Wednesday he does not think it would be necessary.

Flanagan predicted media coverage of the trial of Murray, charged with involuntary manslaughter in Jackson's death, will be bigger than the wall-to-wall coverage of the Anthony case that just ended in Florida.

"How many final arguments do we have to face in this case?" Flanagan asked. "Are we going to face the one in the courtroom and the one when they go home?"

Grace addressed the issue Wednesday during her eponymous show.

"The doctor charged in the death of music superstar Michael Jackson, killing him allegedly with a powerful propofol anesthesia, wants the jury sequestered, from me! From US!" she said. "Claiming watching 'Nancy Grace' will prevent a fair trial; that the jury will be biased. So I guess that makes us, umm ... the good guys!"

Keeping jurors in a hotel, with deputies watching over them, for two months would be expensive for the Los Angeles court system, which is already suffering under tight budget constraints.

Pastor announced Wednesday that jury selection will begin September 8, despite prosecutors' request for another three weeks to prepare their case because of "scheduling issues."

Jury selection was underway in May when the defense requested a delay so its expert witnesses could have more time to prepare for new experts hired by the prosecution. Pastor then dismissed hundreds of prospective jurors and rescheduled the trial to start in September.

The judge will visit Sony Studios soon to review more than a dozen hours of raw video of Jackson's last rehearsals for his "This Is It" tour to decide which clips, if any, will be shown to the jury.

Lawyers for each side spent the past two weeks viewing more than 100 hours of video, narrowing down what they thought was relevant to the case. The prosecution selected 12 hours of video, while the defense identified four.

Flanagan said the video showed him that Jackson was "very talented, that he's pretty good; even on his bad days, he's good."

The defense was looking for clues in the video to show that Jackson was in ill health in his final days, but Flanagan said it was not detectable in his performance video. Jackson also did not appear to be depressed in his final days, he said.

The defense will argue that none of the "This Is It" video is relevant to the criminal trial and would be "a big waste of time."

"It shows him onstage performing," Flanagan said. "I don't know why that's relevant as to what happened the night that he died when he couldn't sleep."

Jackson's death on June 25, 2009, was from an overdose of the surgical anesthetic propofol, combined with other drugs, the Los Angeles coroner ruled.

Murray, whom Jackson hired to care for him as he prepared for his comeback concerts in London, allegedly administered the fatal dose.