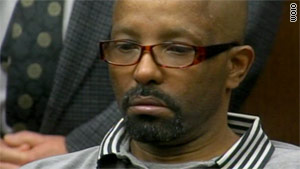 Anthony Sowell had pleaded not guilty by reason of insanity to 85 counts. He was found guilty on 83.
STORY HIGHLIGHTS

(CNN) -- An Ohio jury Friday found Anthony Sowell guilty in connection with the kidnapping, abuse of corpses and aggravated murder of 11 women around Cleveland between 2007 and 2009.

Sowell had pleaded not guilty by reason of insanity to all 85 counts against him, which also included rape and tampering with evidence. The verdict -- which makes the defendant eligible for the death penalty, a decision that will come during the sentencing phase of the proceedings -- came after more than three weeks of testimony, with the prosecution resting its case against him Monday.

The defense did not call witnesses or present any evidence during the trial, according to CNN affiliate WOIO, and rested Tuesday. That paved the way for closing arguments, and by Wednesday, the case was in the jury's hands.

The jury's forewoman gave Cuyahoga County Judge Dick Ambrose the scores of completed verdict forms around 2:30 p.m. Friday, at which point he briefly adjourned the session so he could review the documents. Sporting a gray polo shirt, glasses and clean-cut goatee, Sowell stood and then sat stoically when the lengthy verdict was read aloud -- a process that lasted about an hour, starting around 3 p.m. He yawned once the process was complete.

The jurors found him guilty on 84 counts, with the sole not guilty verdict coming on an aggravated robbery charge.

In addition to murder, kidnapping and other charges, the defendant was also convicted of felonious assault, attempted rape and attempted murder in several cases. The jury determined that he committed numerous crimes "with a sexual motivation," a variation of the offenses that is distinct from the rape charges.

The verdicts ended a saga that began, for investigators, in October 2009 with the discovery of the first two sets of victims' remains inside Sowell's home. Eventually, prosecutors shaped a case claiming that the ex-Marine killed at least 11 women, ages 25 to 52, even as law enforcement reopened cold cases to determine if Sowell might be complicit in other murders.

More women, meanwhile, have since come forward alleging that they'd survived attacks by the now-convicted serial killer. One such story led prosecutors, for instance, to seek a 10-count indictment against Sowell in connection with the alleged rape of a 34-year-old woman inside his home.

Sowell grew up in East Cleveland, joined the Marines at age 18 and traveled to California, North Carolina and Japan, authorities said. People who interacted with him after his 2005 release from prison, where he had served 15 years for attempted rape, said he appeared to be "a normal guy," known locally for selling scrap metal.

His inconspicuous two-story home sits in a dilapidated neighborhood known as Mount Pleasant, where one in five homes was in foreclosure and at least a third of residents got food stamps, according to a 2010 study by Case Western Reserve University's Center on Urban Poverty and Community Development.

Neighbors and even a city councilman had failed to realize that the stench wafting in the area around Sowell's residence was from human flesh, and not a byproduct of a nearby sausage factory.

Moreover, the disappearance of the 11 women -- many of whom lived nearby -- went largely unnoticed for almost two years, with only four of them even being reported missing. Many of his alleged victims struggled with drug addiction at some point in their lives, with court records showing that many resorted to stealing and prostitution to support their habits.

In late 2008, Gladys Wade told police that a man in a gray hoodie offered her beer, and when she declined, he punched her in the face several times. Wade said that he then tried to rape her, dragging her toward his home, adding that she got out only after "gouging his face."

Police investigated Wade's complaint, with one police report noting blood droplets on Sowell's walls and steps. But officers told CNN affiliate WKYC that the case was dropped after Wade declined to press charges.

Then, on September 23, 2009, a 36-year-old Cleveland woman told police a story eerily similar to those of Wade and the woman whose 1989 account led to Sowell's first conviction for attempted rape. She said he'd invited her into his home for beer, punched her in the face, then began performing oral sex on her -- releasing her only after she promised to return the next day.

Sowell was then arrested. More than a month later, police entered his house and found two bodies rotting in his attic. These were the first of the 11 bodies they'd eventually discover, in various states of decay, on his property.

Most of the women whose remains were found in and around Sowell's home were strangled by ligature -- which can include a string, cord or wire -- and at least one was strangled by hand, officials said. Seven still had ligatures wrapped around their necks. A skull is all that remains of one victim. It was found wrapped in a paper bag and stuffed in a bucket in the home's basement.

Sowell's lawyers have declined previous requests by CNN to explain their case, and the suspect has not been interviewed. But in January 2010, attorney John Parker told The Plain Dealer newspaper in Cleveland that he felt police violated Sowell's Miranda rights as he was being interrogated.