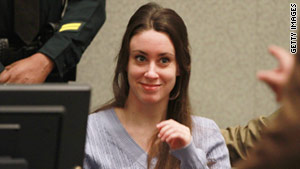 Casey Anthony was found not guilty in the death of her daughter, Caylee. Her trial riveted many viewers.

CORRECTION: An earlier version of this article incorrectly indicated that a source close to Casey Anthony had responded to a suggestion by publisher Larry Flynt that Anthony appear in Hustler magazine. The quote from the source actually pertained to an unrelated subject.

(CNN) -- If Larry Flynt has his way, Casey Anthony could reintroduce herself -- nude -- to America on the pages of Hustler magazine, and make well over $500,000 in the process.

The pornography magnate told HLN's "Nancy Grace" show on Thursday night that talks are ongoing that could land Anthony on the pages of his magazine, weeks after a Florida jury acquitted her of murder in her 2-year-old daughter Caylee's death.

Flynt insisted he was serious about the offer, which he said would include $500,000 up front plus 10% of all profits. He said any payment that the Orlando woman might receive for interviews with media outlets would be "chicken feed" compared to what she'd receive by appearing in Hustler.

"If they want to get their hands on big money, they've got to go through me," Flynt said.

Anthony's trial in Orange County became the fixation of countless people during its seven-week run, many horrified by the girl's death and others drawn in by the family drama. Since her release from jail early on the morning of July 17 -- after getting credit for time served for her conviction on four counts of misleading authorities -- she has remained out of the public eye.

The Hustler magazine founder said that, after a jury cleared the 25-year-old woman on murder charges, he initially did not consider reaching out to her.

But Flynt said his mind changed after being approached by "droves of men" as he was touring the country promoting his new book "One Nation Under Sex."

"They said, 'Why haven't you made an offer? Why don't you want to publish her pictures?' " Flynt said. "They said, 'She's a really attractive person' ... I've never seen that happen before."

Asked whether the decision might be distasteful to the many who feel Anthony got away with murder, Flynt said his tour suggests to him that there was a real demand. He also claimed that a portion of any proceeds would go to charities aimed at addressing child abuse.

Flynt noted, too, that he has "never been one to shy away from controversy," boasting on HLN about printing nude photos of Jacqueline Kennedy Onassis in 1975.

"You've got men who say hey, I want to see her in her birthday suit," he said of the Anthony offer. "There may be some sick individuals ... but that's what life is all about."

Earlier this month, Playboy founder Hugh Hefner said he got a similar flood of requests from people encouraging him to try to get Anthony for his magazine. But he shot down any possibility that would happen.

"It is amazing the number of people that have tweeted me immediately afterward, asking whether or not we would do a pictorial on her," Hefner told CNN's Piers Morgan. "And the answer is simply no. I wouldn't reward someone like that for what has happened."

Mark Lippman, the attorney for the woman's parents, George and Cindy Anthony, said he had no knowledge that his clients had talked with their daughter since her acquittal -- including about this offer. Both parents testified at her trial, with defense lawyers claiming that George Anthony helped cover up his granddaughter's death.

"This is all news to me," Lippman told HLN. "And obviously, Casey is her own person, and she's making her own decisions."