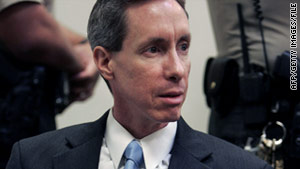 San Angelo, Texas (CNN) -- Warren Jeffs' nephew and niece testified Saturday during his sentencing phase about the alleged abuse they suffered at his hands.

The polygamist sect leader was convicted this week on two counts of sexual assault on a child.

Brent Jeffs, 28, told jurors that his uncle raped him when he was 5 years old.

"He began to tell me that we were going to do God's will," he said Jeffs told him. "This is between me, you and God."

Three jurors wiped tears from their eyes as Brent spoke, his voice breaking with emotion.

Several also cried during the niece's testimony, in which she described an incident that allegedly occurred between her and Jeffs when she was 7 years old.

"He made me sit on his lap," she testified, and did "inappropriate things to me."

She was crying so hard at one point that the prosecutor stopped questioning. Neither side pressed her for details. CNN is withholding the niece's name because she is the alleged victim of a sexual assault. Brent Jeffs has published a book about his life and has previously been public about the allegations against his uncle.

Prosecutors say the penalty phase of the trial could last several days.

The leader of the Fundamentalist Church of Jesus Christ of Latter-day Saints faces a maximum sentence of life in prison on his conviction of sexually assaulting a 12-year-old and a 15-year-old who were his "spiritual wives."

Jurors convicted him of two counts of sexual assault on a child -- charges filed after a 2008 raid on a ranch his church operates near Eldorado, Texas.

Texas Ranger Jesse Valdez and Ezra Draper, who left the FLDS in 2003, also testified Saturday. Valdez identified a number of documents seized during the 2008 raid.

Draper said he attended Alta Academy between 1978 and 1987, when Jeffs was principal. He described being summoned to Jeffs' office and receiving a lecture about his behavior, after Jeffs found out that Draper liked a girl at the school and had exchanged notes with her.

Using a yardstick, Jeffs stroked the inside of Draper's thighs, tapping his crotch three times, Draper said. Jeffs then told him: "Better that one of your members be cut off than the whole body be cast into hell," Draper testified.

He went on to describe changes that Jeffs made to the FLDS, such as banning parades, dances, music and even the color red.

During the hearing Friday, Jeffs said he objected to the introduction of items seized in the raid and documents that should get "religious protection."

He requested to be excused from the sentencing phase to avoid hearing his religion degraded. Jeffs remained outside the courtroom Saturday.

"I am God. Cease. Do not present my holy ways as a thing of naught," the self-proclaimed prophet said before he left court Friday. "Hear my warning as a full awakening. Let my holy way be of freedom."

Deric Walpole, one of the defense attorneys Jeffs had fired earlier in trial, is representing him during the penalty phase.

Jeffs represented himself during the guilt-innocence phase of the trial. He was silent during most of his 30-minute closing argument Thursday, mumbling at one point, "I am at peace."

Texas prosecutors rested their case Wednesday after playing a key piece of evidence for jurors: a 20-minute audiotape that began and ended with a man saying a prayer.

Prosecutors alleged that the recording was of Jeffs' sexual assault of a then-12-year-old girl in the presence of three other "wives."

The girl had grown up at Jeffs' Yearning for Zion ranch, authorities said.

Prosecutors showed the jury a photo of her with her arms around Jeffs, and a marriage certificate that listed the girl's age as 12 at the time.

Jurors also heard audio recordings that prosecutors said showed Jeffs instructing a 14-year-old and his other young "wives" on how to sexually please him in order to win God's favor.

Prosecutors said the 14-year-old was Jeffs' "spiritual wife" and conceived a child with Jeffs when she was 15.

Jeffs could be sentenced to five years to life in prison on the charge of aggravated sexual assault regarding the alleged 12-year-old. For the other count, he could face a sentence of two to 20 years.

In Session's Beth Karas, Grace Wong and Jim Kyle contributed to this report.