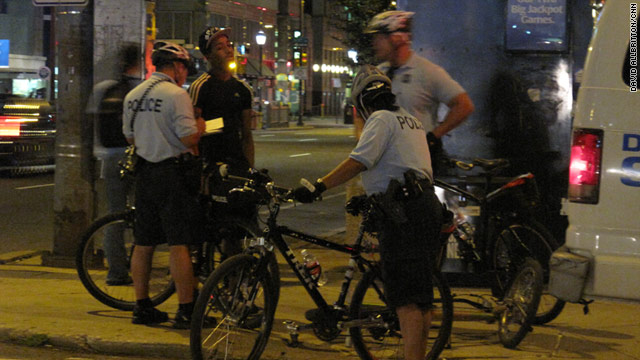 Police on bicycles detain a minor for a curfew violation in Philadelphia.
STORY HIGHLIGHTS

The City of Brotherly Love is cracking down after a rash of teen violence by roving mobs. Late Friday, there were no signs of trouble, police spokesman Ray Evers told CNN.

"It definitely made a tremendous difference," he said, referring to the curfew.

Police patrolled the two areas under curfew, including downtown areas popular with locals and tourists during the Friday night curfew. The 50 teens are among the first charged with violating the newly strengthened city ordinance, which forbids anyone under 18 from being out on the street after 9 p.m. Fridays and Saturdays in two locations: Center City, in the downtown area, and University City, the west Philadelphia neighborhood where the University of Pennsylvania is located.

An hour after the curfew took effect, police had taken 22 juveniles between the ages of 14 and 17 into custody, Evers said.

All 50 minors were cited with a code violation for breaking the curfew, and were not allowed to leave the police precinct until they were picked up by a parent or guardian. All 50 were picked up by Saturday morning, Evers said.

Nutter delivered tough remarks in a church sermon last weekend that has received international attention -- a blunt, no-excuses scolding that coincided with the start of the England riots.

An African-American, Nutter noted that those involved in the Philadelphia attacks are predominantly black and said their behavior damaged themselves and their race.

He upheld religious values, underscored the importance of parental discipline and lambasted absentee parents, particularly fathers, for neglecting and not keeping watch over their children.

Nutter's measures target both young attackers and their parents or legal guardians.

He signed an order temporarily moving the curfew up an hour on Fridays and Saturdays for everyone under the age of 18 in the two targeted enforcement districts.

Throughout the rest of the city, the curfew will remain 10 p.m. for those under the age of 13 and midnight for minors between ages 13 and 18.

"Minors who are caught breaking curfew will be sent home, brought home or transported to a police station where their parents will be contacted. Minors may be issued a citation with a $100 to $300 fine for a first offense," the city said in a news release.

If parents don't come for their child "within a reasonable time, police will contact the Department of Human Services to start an investigation."

Parents will receive a notice for first violations, and will be fined up to $500 for successive violations. They are also subject to imprisonment for up to 90 days for repeat curfew violation offenses, according to the city.

In addition, parents "whose child under the age of 18 is found liable or guilty by a court for injury, theft or other criminal acts" will be liable to the person who suffered the injury or loss of property," the statement said.