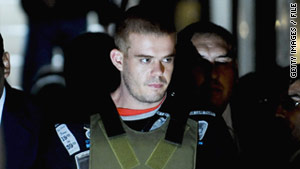 Joran van der Sloot faces charges in the killing of Stephany Flores, who was found dead in his Lima hotel room.
STORY HIGHLIGHTS

(CNN) -- The family of a slain Peruvian woman is urging prosecutors to file their case against murder suspect Joran van der Sloot, warning that he may be released by December unless the case goes ahead.

"We are worried because Peruvian law says that if a suspect's trial doesn't begin within 18 months after his arrest, authorities are obligated to set the suspect free," Ricardo Flores, the dead woman's father, told CNN.

Van der Sloot faces charges in the May 2010 killing of Stephany Flores, who was found dead in his Lima hotel room. Police say van der Sloot took money and bank cards from her wallet and fled to Chile, where he was arrested a few days later.

Investigators delivered their case file to prosecutors in June for a decision on charges. Ricardo Flores said the prosecutor in the case, Miriam Riveros Castellares, is "not moving with the speed that a case of this magnitude merits."

"We're asking that either the prosecutor file charges or that authorities remove her from this case and name somebody else," he said.

There was no immediate response to the family's concerns from the prosecutor's office.

Van der Sloot was once the prime suspect in the disappearance of Alabama teenager Natalee Holloway, who vanished while on a graduation trip to the Caribbean island of Aruba. He was arrested twice but never charged in connection with Holloway's disappearance, which remains unsolved.

His lawyers have asked that prosecutors consider charging the 24-year-old Dutch national with the Peruvian equivalent of manslaughter, rather than murder, in Flores' death.

"He had an indifferent and prideful attitude. He looks as if he has everything under control. He looks better than when he appeared on TV after he was arrested," the victim's father said.

CNN's Rafael Romo and In Session's Mayra Cuevas contributed to this report.