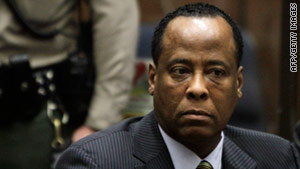 Los Angeles County Superior Court Judge Michael Pastor, however, will allow testimony from two doctors about what the defense contends was Jackson's request for the surgical anesthetic propofol, a drug the coroner ruled played a major role in his death.

Defense lawyers appeared frustrated with the rejection of their witnesses, although they declined to speak to reporters about it as they left the downtown Los Angeles courthouse after Monday's hearing.

Murray is charged with involuntary manslaughter in the June 25, 2009, death of Jackson, who would have turned 53 Monday.

The defense wanted to have a Santa Barbara County, California, detective testify about drugs found at Jackson's Neverland estate during a search related to the sex charge.

"In particular, it is relevant to the defense that Michael Jackson possessed both propofol and Demerol in his residence as early as 2003," the defense said in a motion filed Monday.

Los Angeles County Deputy District Attorney David Walgren argued testimony about drugs Jackson possessed in 2003 "has absolutely nothing to do with the standard of medical care" Murray gave Jackson the day he died on June 25, 2009.

Bringing up anything about the molestation trial, which ended with Jackson's acquittal, would be "character assassination on the victim," Walgren said.

Defense lawyer Ed Chernoff, in a hearing Monday afternoon, assured the judge that he did not intend to question the detective about the sex charge, but only about drugs he found in his search.

Murray's defense lawyers want to argue that Jackson was addicted to the painkiller Demerol and was undergoing withdrawal from the drug when he died, Chernoff said. He said he expects the prosecution will say he "merely liked Demerol" and was not addicted.

Jackson's "past drug addictions, use desires, possessions" is relevant, Chernoff said in court.

Pastor ruled that the events were too far in the past for this trial and could mislead the jury.

"Anything having to do with the year 2003, any incident with Neverland, Santa Barbara, medical doctors, fundamentally is irrelevant," Pastor said. "It proves absolutely nothing with regard to the year 2009."

Pastor ruled that Beverly Hills dermatologist Dr. Arnold Klein could not be called to testify about giving Jackson Demerol shots. Testimony about Jackson's visits to Klein's office in the days before his death could lead the jury "down the path of prescribing to Dr. Klein some sort of criminal culpability in the death of Mr. Jackson."

However, Klein's medical records can be used in the trial, he ruled.

Two of Klein's office employees also cannot be called as witnesses, he ruled.

Prosecutors in the trial of Murray, Jackson's last doctor, had asked the judge to exclude or limit the testimony of 26 witnesses Murray's lawyers said they might call.

Pastor has indicated he would keep the trial limited to what happened the last several days of Jackson's life. His decisions on the prosecution's request to limit witnesses indicate how tightly the judge will limit the defense arguments.

Other witnesses the judge said the defense could not call include John Branca, the lawyer who became executor of Jackson's estate after his death. Nothing about Jackson's finances can be considered, he said.

The Los Angeles coroner has ruled that Jackson's death was caused by an overdose of the surgical anesthetic propofol, combined with other drugs.

Prosecutors have accused Murray of having a role in the overdose. Jury selection is scheduled to begin on September 8, with opening statements expected to be heard on September 27. Lawyers estimate the trial will conclude in early November.

If convicted on the involuntary manslaughter charge, Murray could face up to four years in prison.