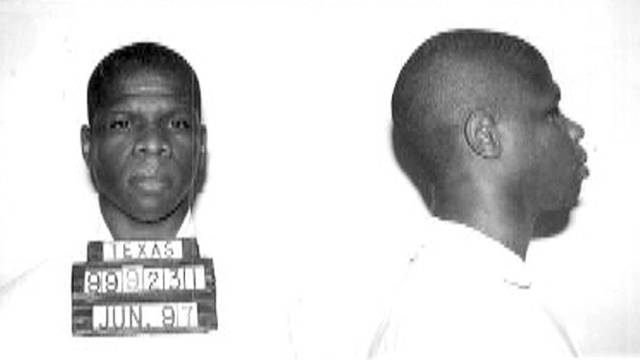 Dallas (CNN) -- The U.S. Supreme Court has delayed the scheduled execution on an inmate on death row in Texas amid questions about a psychologist who testified that blacks and Hispanics were more likely to commit future crimes.

"Praise the Lord Jesus," Clark quoted the condemned man as saying. "God is worthy to be praised. God's mercy triumphs over judgment, and I feel good."

Buck had been set to die by lethal injection, but the court delayed the execution to give it time to review the way a lower court handled the case. While that happens, Buck remains on death row.

Buck was convicted of the 1995 killings of Debra Gardner and Kenneth Butler. According to Texas officials, Buck shot Gardner in front of her daughter, who begged for her mother's life.

A third person, Phyllis Taylor, was shot, but she sought clemency for Buck this week. The Texas Board of Pardons and Paroles, however, recommended against granting Buck clemency

Buck's attorney, Katherine C. Black, said the recommendation, "fails to recognize what the highest legal officer in the state of Texas has acknowledged: No one should be executed based on a process tainted by considerations of race."

Because of that testimony, six of those seven inmates were granted resentencing trials. Buck, who is black, was not among them.