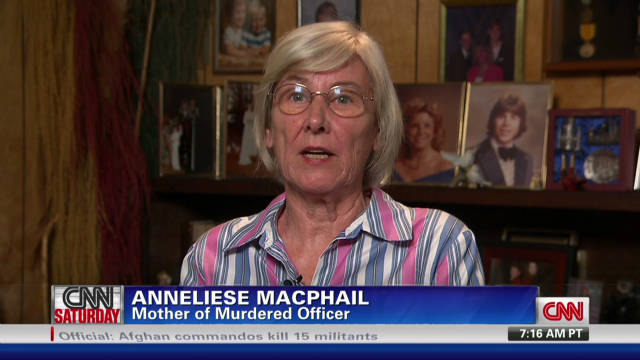 Mother of slain cop: 'It has been hell'
STORY HIGHLIGHTS

"I will never have closure," said Anneliese MacPhail. "But I may have some peace when he is executed."

Her son, Mark MacPhail, was gunned down in a 1989 shooting that Davis was convicted for. The former Army Ranger left behind his wife and two then-young children.

The case has drawn international attention for what Davis' advocates say is a conviction based on flimsy evidence.

They include his sister Kimberly Davis, who told CNN on Saturday that she is "emotionally prepared" for an execution but does not think it is warranted.

"My brother, he is innocent," she said. "(MacPhail's family) won't have closure if an innocent man is executed."

Since his 1991 conviction, seven of the nine witnesses against him have recanted or contradicted their testimony. No physical evidence was presented linking Davis to the killing.

Yet the slain officer's mother insists she "never had any doubts."

"I think these people are just against the death penalty," she said, adding later that they "have no idea what's going on. ... They don't know what happened."

In a 2008 statement, then-Chatham County District Attorney Spencer Lawton described how Davis was at a pool party in Savannah when he shot another man, Michael Cooper, in the face. Davis was then driven to a nearby convenience store, where he pistol-whipped a homeless man, Larry Young, who'd just bought a beer.

Soon thereafter, prosecutors said MacPhail -- who was working in uniform, off-duty, at a nearby bus station and restaurant -- arrived. It was then, the jury determined, that Davis shot the officer three times, including once in the face as he stood over him.

Davis' lawyers, in a petition to a U.S. District Court, insisted that there is "no physical evidence linking" Davis to MacPhail's murder. They point, too, to "the unremarkable conclusion" of a ballistic expert who testified that he could not find definitively that the bullets that wounded Cooper and killed MacPhail were the same.

Yet Georgia's attorney general, in an online statement, notes that the expert said the bullets came from the same gun type and noted that casings at the pool party shooting matched those -- and thus came from the same firearm -- as those found at MacPhail's murder scene.

After being presented this evidence, a jury in 1991 convicted Davis on two counts of aggravated assault and one each of possessing a firearm during a crime, obstructing a law enforcement officer and murder. The latter charge led, soon thereafter, to his death sentence.

Davis has been scheduled for execution three previous times, delays that the victim's mother said "boggles" her.

"I'm not out after blood, I'm after justice," Anneliese MacPhail said. "I want my son to rest in peace."

During an Atlanta rally and march on Friday, Davis' supporters -- insisting he was wrongly convicted in MacPhail's shooting -- said this time will be different.

They are hopeful that their appeals for clemency will be answered by the Georgia Board of Pardons and Paroles.

Hundreds of supporters marched through the downtown streets of the Georgia capital Friday chanting, "Free Troy Davis." Others carried signs that read, "Too Much Doubt."

However, unless something dramatic happens, Davis, 42, will die by lethal injection on Wednesday.

The Rev. Raphael Gamaliel Warnock, who is set to testify before Davis' parole board Monday, says he "can only begin to imagine the pain (the family) must be feeling."

MacPhail "was protecting the community, and there is no pain greater than when a parent loses a child," Warnock said.

Still, he says, "there is too much doubt in this case for an execution."

"I have met with (Davis) on death row," Warnock added. "I believe he is innocent."

Hope is just about all Davis has right now. The pardons and paroles board denied him clemency once before. The board has never changed its mind in any case in the past 33 years.

On Thursday, supporters delivered to the pardons and paroles board a 663,000-name petition asking for clemency.

MacPhail's family has steadfastly asserted that Davis was the killer, as has the man who prosecuted him.

"I'm just disappointed so many people have been led to believe nobody has paid attention to these recantations. It is simply not the case," Lawton, the former district attorney, once told CNN affiliate WTOC.

"On what grounds are the recantations more believable than the testimony in court? None," he said.

Reviewing Davis' claims of innocence last year, the U.S. District Court for the Southern District of Georgia found that Davis "vastly overstates the value of his evidence of innocence."

"Some of the evidence is not credible and would be disregarded by a reasonable juror," Judge William T. Moore wrote in a 172-page opinion. "Other evidence that Mr. Davis brought forward is too general to provide anything more than smoke and mirrors," the court found.