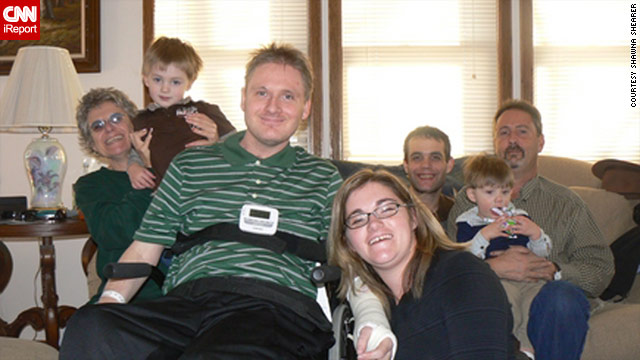 Andrew Shearer, center, says being surrounded by family has helped his recovery from strokes and broken bones.
STORY HIGHLIGHTS

(CNN) -- A thumbs up. Two opened eyes. A smile. These simple signs of recognition from U.S. Rep. Gabrielle Giffords kept hope alive for her recovery from a bullet to the head January 8. And later this week, her parents have told family members and friends in an e-mail, she'll be moved to Houston, Texas, to begin aggressive rehab with a team of medical specialists.

Giffords opened her eyes for the first time January 12, and one of her doctors, Dr. Michael Lemole, said the "unexpected familiarity" of having close friends visit might have helped her progress. She still has a long journey ahead in recovery, but the support of family, friends and onlookers across the country is evident.

Astronaut Mark Kelly, Giffords' husband, has been by the congresswoman's side since the shooting. He told ABC's Diane Sawyer he will be there holding Giffords' hand as many days as it takes, "whatever it takes."

Patients, their families and health care professionals tell CNN that having loved ones present and actively encouraging recovery can make a profound difference.

Shawna Shearer believes it's true, as she said in her iReport. Her husband Andrew, 31, broke both knees and femurs and suffered several small strokes in May in a head-on car crash. For two months, he remained unconscious, but he was never alone. His wife, mother and father took turns staying with him; his father slept in the waiting room many nights.

"I tried to stay as positive as I could," Shawna Shearer, 28, said. "I remember when Andrew opened his eyes, and it was amazing to us."

Although there are no hard data to suggest that having family and friends around can help a brain trauma victim regain consciousness or brain function, it is true that familiar voices have special access to the brain, says Dr. Lee Schwamm, associate professor of neurology at Harvard Medical School and vice chairman of neurology at the Massachusetts General Hospital.

It's as if there's a little police officer inside your brain deciding which signals are allowed to go through and which are not, Schwamm said. And the officer gives privileged access to familiar voices, even with significant injury to the brain and reduced consciousness.

Shawna Shearer hoped for signs that she and the rest of the family were getting through to Andrew. But when he first woke up, it was hard to tell what, if anything, he could understand of what others said, Shawna said. Then, he started following family members with his eyes. By August, he could nod his head for "yes."

Andrew Shearer told CNN he doesn't remember anything that happened between the day of the accident and around August or September, but appreciates the "tremendous help" that the mere presence of his family members brought.

Randie Alf, 28, experienced that, too. In December, she had an aortic dissection and fell unconscious for two days. Her large family, spread out across the United States, banded together to visit, pray and post updates on Facebook.

"When I 'awoke' I wasn't sure when it was and I was still not making too much sense, but I knew where I was and who was with me, my mom and dad and my cousin and my aunts and my friends. And day by day I got stronger in both mind and body," Alf wrote in her iReport.

"I had such a wide array of people thinking about me. I definitely believe that those people are a lot of the reason I got better so quickly," she told CNN.

Alf stayed in the hospital for two weeks, mostly in the ICU. She is staying with her parents during her recovery. Her younger sister, some cousins and many friends are also close by.

Kimberly Glassman, chief nursing officer for NYU Langone Medical Center, has witnessed many occasions of unconscious patients waking up amid the support of families, and believes they have an important role to play in recovery.

"When we have been able to speak to patients who have been in that state and woken up, it's very common for them to say that they heard people talking to them, they could feel people touching them," she said.

It's equally helpful for the families to feel as though they are doing something useful and meaningful for their loved one in the ICU, Glassman said. Being at the bedside of the patient may not only transfer familiar signals of touch and sound, but also means a lot to the family members.

Andrew Shearer is still recovering, currently in in-patient rehabilitation. From the strokes, he has complications with mobility, and a lower speed of cognitive processing, but no difficulty speaking. His wife and children are looking into moving somewhere where he can move around easier than in their condo, as he mostly uses a wheelchair.

"If you've got people at your side encouraging you, you have such an advantage over isolated and withdrawn patients who have to do that journey alone," Schwamm said.

Kelly is already prompting his wife to have expectations for a speedy turnaround: "I told her she's going to be walking in two weeks," he told Sawyer. "It's good to have a goal, and she's a very goal-oriented person."

There are perhaps more subtle ways that family support can also facilitate a recovery: A vested interest on the part of the patient's relatives and friends can help the hospital staff feel more connected to the patient also. At Massachusetts General Hospital, families of admitted intensive care unit patients are invited to make posters with photos so that hospital staff members have a better sense of who they are. If the family believes in the patient, the staff may be a little more hopeful than they might have otherwise.

"When families give up on the patient's recovery, I think the health care team may do the same," Schwamm said.

Alf and Andrew Shearer both recommend that family and friends of someone in the hospital try to be there for the patient as much as possible. Even if you can't be there physically, phone calls and cards do help, Alf said.

In fact, nurses such as Glassman will put the phone up to an unconscious patient's ear if a family member can't be there in person. They'll read every card sent to these patients who can't read themselves.

"I would encourage families to be hopeful, to be present, and to really keep hope alive in their heart," Schwamm said. "We do see patients like Ms. Giffords, and we see them often."