Inside a brain injury recovery 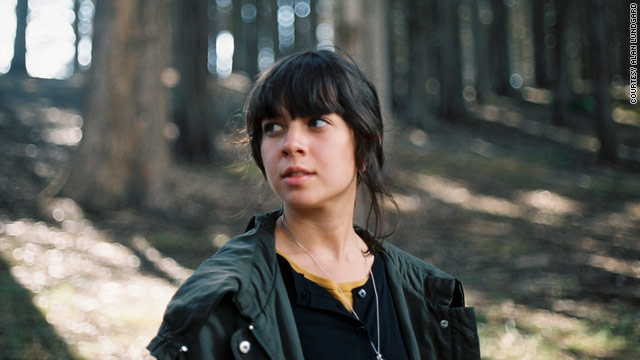 (CNN) -- From a rehabilitation center in New York, Emilie Gossiaux has been planning her next art project, which she will probably never see. She's thinking it will involve constructing a chair out of wood and then covering it in multicolored clay to turn it into a completely different shape.

"I've been thinking the best way to work is to work with my hands," said Gossiaux, who lost her vision after being struck by an 18-wheeler on October 8. As a result of the accident, she had a stroke and a traumatic brain injury; her leg, head and pelvis were fractured.

As U.S. Rep. Gabrielle Giffords begins her journey to start rehabilitation in Houston on Friday, this aspiring artist is checking out of her own inpatient recovery program.

Although Giffords' brain injury results from a bullet wound, Gossiaux's boyfriend, Alan Lundgard, sees many parallels between the women in their initial stages after injury, including responsiveness to touch. And like Giffords, Gossiaux is surrounded by people who care about her. Lundgard has spent nearly every night with her.

"It's that family link, that family love, that family support -- they've all said, all the medical staff have said -- that really promotes the healing and the rehabilitation, which is very painful and very hard," Emilie's mother, Susan Gossiaux, said.

But Gossiaux almost didn't make it to rehabilitation. Doctors told the family that she wasn't eligible because she could not follow commands; she would have to go to a nursing home. Her pupils did not appear to respond to visual stimuli, and she had been hearing-impaired since kindergarten.

Surviving a shot to the head

Lundgard, though, did not give up. He went online and researched how Helen Keller's teacher communicated with her: by spelling on the palm with one finger. And he didn't expect a response when he tried this technique to write out "I love you."

Once she was given a cochlear implant, Gossiaux's personality came rushing back, Lundgard said. She has been in rehabilitation since late November and is scheduled to be discharged Friday, her mother said. She will continue rehabilitation in a New York outpatient capacity, including therapy for visual impairment.

The first goal for patients who come to rehabilitation for brain injury is to establish a more normal routine than in the ICU, said Dr. Richard Riggs, chairman of the Department of Physical Medicine and Rehabilitation at Cedars-Sinai Medical Center in Los Angeles. The staff helps patients get into a regular pattern of sleeping, waking, bowel and bladder elimination, meals, dressing, bathing and other hygiene

Patients are typically scored on 18 parameters measuring cognitive and physical abilities, and based on that, specific therapists put together a 24-hour program. Goals may include hand movement, communication and swallowing.

The goals are pursued through specific types of therapies, including physical, occupational and speech.

In physical therapy, a typical starting place is sitting. Once the patient is able to support his or her own trunk and body weight while sitting, the patient and therapists work on moving from the bed to a chair or toilet. If this can be done fairly independently, the next step is walking with assistance.

"Any brain injury patient could have balance problems, coordination problems; one could have motor planning problems; there's a whole host of things we would look for," Riggs said.

Occupational therapy, on the other hand, focuses on upper limb activities. The therapist will look at how the patient is doing with bathing, dressing and other self-care activities, said Dr. Jeffrey Palmer, director of the Department of Physical Medicine and Rehabilitation at Johns Hopkins University. This therapy also deals with higher-level functions such as managing finances and being able to make change.

Speech-language pathologists help patients with their ability to read, write and speak, and generally make sure that basic needs can be met. If not able to speak, the patient may be able to express needs by pointing to a picture board, Riggs said. The same therapists also focus on the patient's ability to swallow, as it involves the same body parts as speaking.

The experience is highly individual, and some patients have more difficulty than others. Rehabilitation isn't necessarily painful, but many people express frustration about not being able to do what they want to do, Palmer said. This is particularly true for those who cannot speak but know exactly what they want to say.

Depending on how the patient is injured, there can be tightness and loss of flexibility and pain involved in regaining the strength to stand, for example.

Much of the physical therapy was painful for Gossiaux. Not being able to bend her leg was strenuous, Lundgard said, and the fracture jutting into her muscle caused a great deal of pain.

Half the struggle has been her visual deficit. The frustration of not being able to see compounded the difficulty of basic tasks such as tying shoes, which could take 10 minutes, Lundgard said.

Gossiaux was speaking and swallowing well already, so part of her therapy focused on improving abstract reasoning through logic puzzles and other challenges, Lundgard said.

The stroke affected her right side, but she is coming along in improving her dexterity and strength, her mother said. When Gossiaux started walking last week, she "wanted to run," and the physical therapist had to tell her to slow down.

"I didn't want to be here. I just wanted to go home, but now I think I'm going to miss all the people that I've worked with so far," Gossiaux said.

She has some weakness in working memory, but her mother says her doctor recommends that she return to her school, Cooper Union, and that she will continue to improve in the next year. The young artist is planning to learn Braille and to try her hand at performance art and music.

What recovery is possible

A 2008 study in the journal Archives of Physical Medicine and Rehabilitation found that patients who survive severe penetrating brain injuries -- for example, Giffords -- tend to have similar outcomes as those who have motor vehicle-related brain injuries. The largest improvement is in the first year after injury, the study found, and getting back into the community can be expected.

But even in what are deemed full, successful recoveries, patients can have problems with memory and integrating too many stimuli at once. That last 5% to 10% of intellectual and executive function can be difficult to recover, and specialists haven't figured out how to best help patients restore that level of processing, Riggs said.

"I find very few people with a really severe brain injury or penetrating injury that would say that they are totally normal and get back to where they were before," Riggs said. "There will always be some degree of difference that they can put their finger on, whether you can or not."

In Gossiaux's case, Lundgard says that she is "100% completely herself" and that her speech is the same. In fact, since she communicates only by speaking and listening, she has shed her prior shyness and quietness she'd developed because of her hearing impairment.

"I feel like I know her better now than I did prior to the incident," Lundgard said. "She's opening herself up to the world."

Over the past few months, Gossiaux appreciated the "amazing" support of her family, boyfriend and friends who have stayed by her side, and people around the world who have read about her online and send their donations and prayers.

"I've had so many people e-mailing me about how I've inspired them to meet their own challenges in life," she said.