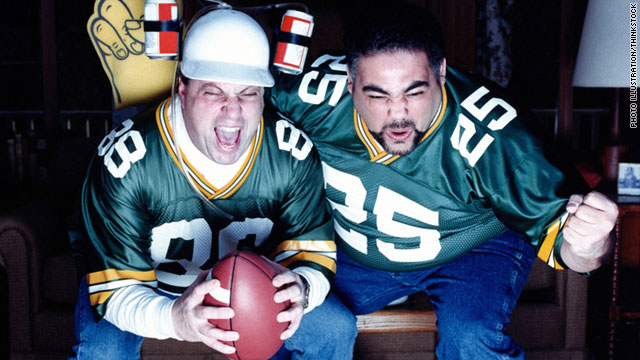 (Health.com) -- This Sunday's Super Bowl could prove to be a real heartbreaker for some fans of the losing team.

A new study suggests that the emotional stress fans feel after a loss may trigger fatal heart attacks, especially in people who already have heart disease. Stress generates the so-called fight-or-flight response, which causes sharp upticks in heart rate and blood pressure that can strain the heart.

For people with heart disease -- or for those who are at risk due to factors such as obesity, smoking, and diabetes -- such strain can prove harmful, if not fatal.

In the study, which was published Monday in the journal Clinical Cardiology, researchers analyzed death records in Los Angeles County for the two weeks after the 1980 and 1984 Super Bowls, both of which featured teams from Los Angeles. (The game days were included.) Then, as a control, the researchers looked at the same data from the corresponding days in the intervening years.

In 1980, when the Pittsburgh Steelers staged a fourth-quarter comeback to beat the underdog L.A. Rams, heart-related deaths shot up 15% among men and 27% among women in the subsequent two weeks, compared with the same period in 1981 through 1983.

There was also a significant increase in deaths among people ages 65 and older, the study found.

Heart attack? There's an app for that
RELATED TOPICS

The 1984 Super Bowl was a different story. The L.A. Raiders handily beat the Washington Redskins, and unlike four years earlier, the cardiac death rate didn't increase after the game. In fact, the death rate for women and older people dropped slightly.

"Fans develop an emotional connection to their team...and when their team loses, that's an emotional stress," says the lead author of the study, Robert A. Kloner, M.D., a professor of cardiology at the University of Southern California's Keck School of Medicine, in Los Angeles. "There's a brain-heart connection, and it is important for people to be aware of that."

The apparent link between the Super Bowl loss and heart-related deaths is plausible but largely speculative.

Kloner and his colleagues looked only at death-certificate data, not individuals, and they can't be sure that the people who succumbed to heart attacks following the 1980 game were Rams fans, or even watched the game.

Inside the mind of an obsessed fan

David Frid, M.D., a cardiologist at the Cleveland Clinic who was not involved in the study, agrees that "emotional triggers" can set off heart attacks and other cardiac events. But he's not convinced that grief caused by the hometown loss was responsible for the spike in deaths.

"Was it due to the fact that the Rams lost?" Frid asks. "Or was it the emotional roller coaster of the game itself? Does it have to do with the excitement of the event?"

Health.com: How stress can break your heart -- literally

The 1980 Super Bowl was indeed an intense contest, as the study notes. The Rams and Steelers repeatedly traded the lead, and fans of both teams would have experienced extreme and fluctuating emotions -- joy, frustration, anger, elation -- throughout the game. (The fact that the game was played in the Rose Bowl, in Pasadena, may have only intensified the emotions for Rams fans.)

For a number of reasons, the 1984 game would have been much less stressful for people in Los Angeles. The outcome was never in doubt, the Raiders were relatively new to the city, and the game was played far from home, in Florida.

Stress may not be the only factor at work, however. For instance, consuming copious amounts of beer and fatty foods like buffalo wings -- practically a requirement at many Super Bowl parties -- can also trigger a potentially deadly heart attack.

"One high-fat meal can cause your blood to be more likely to clot," Frid says.

The researchers were surprised by the increase in heart-related deaths among women after the Rams' loss. A similar study conducted in Germany during the 2006 World Cup found that heart attacks spiked on days when the German team played, but mainly among men.

"It may be the same emotional response as it is for men. Women root for their teams, too," Kloner says. "Another possibility is that perhaps a mate's reaction adversely affects the female."

Many people in the U.S. have heart disease and don't even know it, Frid says. With Super Bowl Sunday approaching, he has a simple piece of advice for fans whose diet or lifestyle may be putting them at risk for a heart attack:

"Address what needs to be changed so that you can make it to the end of the game."