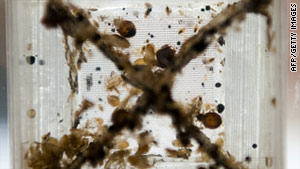 A female bedbug can produce 400,000 offspring, and most bedbugs can go up to a year between feedings.
STORY HIGHLIGHTS
RELATED TOPICS

Washington (CNN) -- The average female bedbug can produce up to 400 offspring in her lifetime.

And most bedbugs can survive up to a year between feedings.

Such facts are contributing to a growing recognition that America's bedbug crisis is unlikely to subside at any point in the near future, experts concluded Tuesday at the Environmental Protection Agency's second summit on the issue.

Ninety-five percent of industry respondents to a recent National Pest Management Association survey said they had encountered a bedbug infestation in the last year. Prior to 2000, only 25% said they encountered such an infestation.

Among other things, Tuesday's conference covered ways in which consumers can protect themselves from the problem. Reducing clutter in the home topped the list, as well as an awareness of what the first signs of an infestation looks like.

Unfortunately, there is no magic bullet to eliminate bedbugs, noted Jonathan Wild, a housing official from Portland, Oregon. We are "never going to get rid of bedbugs in our lifetime," he warned.

How do you deal with an infestation? Extreme temperatures -- both hot and cold -- will help eliminate bedbugs. Washing sheets and towels are a popular defense, according to Dini Miller, an urban pest management specialist. Miller noted that drying machines -- not washers -- ultimately kill the creatures.

But such steps will only help to contain -- not end -- America's latest bedbug outbreak, the experts stressed.