5 secrets not to keep from your cardiologist 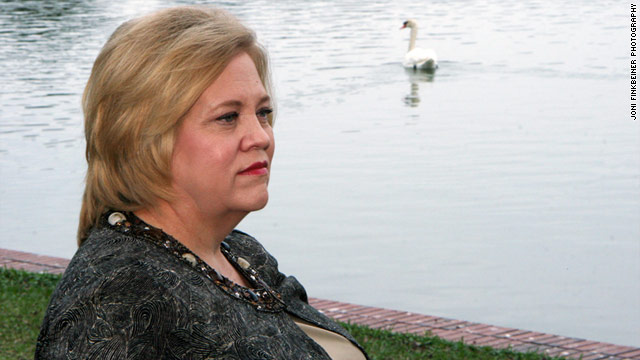 Carolyn Hennecy knew that genetic coronary artery disease ran in her family, but hoped she would be different.
STORY HIGHLIGHTS
RELATED TOPICS

(CNN) -- Carolyn Hennecy had a suspicion about what was happening to her when she started having shortness of breath and tension in her left arm and jaw.

She was working as a legal assistant at a busy law firm in Lakeland, Florida, and had witnessed her boss experience the same symptoms shortly before he had a heart attack one year earlier.

Hennecy thought her heart might be in trouble, too, but she didn't rush to her doctor's office or schedule an appointment with a cardiologist to address her own symptoms.

"I ignored it for two or three months because I thought it would be OK," she explains. "I needed to lose weight, and I figured it had to be my weight, something stress related or a figment of my imagination."

The symptoms continued to get worse, and eventually Hennecy felt as if an elephant were sitting on her chest.

"When it got to the point where I couldn't get out of my car and walk into the building without losing my breath, I figured it was time to deal with the elephant."

"Denial is my biggest enemy"

Hennecy scheduled an appointment with her general practitioner, who ran a battery of tests. All the results were normal, but her doctor knew something was wrong. She was urged to see a cardiologist.

"The cardiologist immediately scheduled a treadmill stress test," Hennecy says. "When I got on the machine, I began having discomfort and pain in my chest within a minute. I collapsed over the handle." 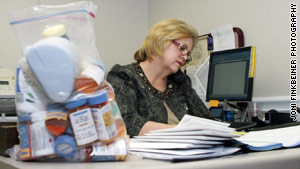 Hennecy has to take a combination of these pills everyday.

Hennecy was having a heart attack. She was rushed to the cardiac catheterization laboratory for more testing. Hennecy learned that her left anterior descending artery was almost completely blocked, and doctors would need to insert a stent, a tube that is placed into the artery to improve blood flow to the heart muscle.

Hennecy, whose mother died of a heart attack at age 66, and whose father, brother and paternal grandfather had all experienced heart problems at relatively young ages, knew that genetic coronary artery disease ran in her family, but hoped she would be different.

"Denial is my biggest enemy" she says. "I was going to be the exception to the rule."

Patients don't tell their doctors everything

Hennecy, who now blogs about her battle with heart disease, admits it was hard confessing that her heart wasn't in the condition she wanted, but says it's almost equally as hard to be honest with herself and the cardiologist about ongoing care.

"I still have difficulty telling my doctor when I have a new symptom," says Hennecy, who fears being told she may have to go back to the hospital.

"When the cardiologist asks, 'How are things?' my general response is 'Just peachy,' which can mean anything from absolutely wonderful to oh my God I'm going to die."

According to a General Electric study looking at the disconnect between patients and providers, about 28% of Americans say they sometimes lie or omit facts when talking to their health care provider about their care.

Providers say they think the number is much higher. The GE study found 77% of providers say more than a fourth of their patients omit facts or lie to them about their personal health.

"There are a variety of reasons why patients withhold information," says Dr. Nieca Goldberg, director of the Women's Heart Program at New York University. "Sometimes they are ashamed. Sometimes they can't afford the medications. Sometimes they feel like they might upset the doctor."

Dr. Alfred Bove, past president of the American College of Cardiology, says there is another reason patients may not be as up front as their physicians would like.

"I think a lot of patients won't tell you details or symptoms because they are not aware of what the important details to share are," he says. "So they deny or ignore it and the next thing they just drop over."

February is American Heart Month, and the Centers for Disease Control just released estimates on the number of Americans at risk for heart disease. According to the CDC, 68 million Americans are taking medications to lower high blood pressure, a condition that increases the risk of coronary artery disease and can lead to heart attacks.

It's never a good idea to withhold information from any doctor whom you entrust with your care. However, cardiologists say there are specific concerns that can prove to be fatal when they aren't informed.

Here are five secrets you should not keep from your heart doctor.

1. If you are taking vitamins or supplements

Alternative medicine and herbal remedies may be great for some to help manage chronic conditions, but cardiologists warn certain supplements can pose serious risks to people who are also taking medications for heart disease.

From alfalfa to yohimbine, a study in the Journal of the American College of Cardiology lists more than two dozen herbal products patients with cardiovascular disease should avoid.

2. If you have undergone tests from other doctors

Patients may sometimes be shy about admitting to their physician that they have received a second opinion or additional testing, says Dr. Richard Stein, a national spokesperson for the American Heart Association.

"Your goal walking out is to get the best health care -- not to make the doctor feel good," he says. If you've had a blood test, EKG, echocardiogram or angiogram, Stein says to keep your own patient file and bring it with you to your appointment.

"It's not fair to expect a doctor to understand the seriousness of your condition if they don't have all of the information."

To help you maximize your next visit to the cardiologist, CardioSmart provides an online checklist to help you prepare.

3. If you have skipped your medications

"Patients often lie about taking blood pressure or cholesterol medication," says Goldberg. She says sometimes they believe these drugs aren't necessary if they alter their diet. While that may be true in the long term, the effects of diet change are not as immediate, and the patient may be prolonging the problem.

Goldberg also says another potential problem arises when your cardiologist reads blood pressure and checks your cholesterol levels and notices no change. "You don't want to accidentally be given a prescription for a higher dose, when you're not even taking the lower dose," she explains.

4. If you are going through hard times

Hennecy says during the time of her first heart attack, she had been grappling with years of domestic violence and abuse, and she was at a breaking point.

However, it wasn't until 2007, one year after having another stent implanted, when she finally brought this up to her doctor.

"When you're under stress you have extra adrenaline that can stimulate the heart to skip beats and have palpitations," says Bove.

He says patients who have experienced some serious life trauma -- like a death, layoffs, divorce, or even just a stressful job -- may have elevated blood pressure and should be monitored more vigilantly.

5. If you haven't really stuck to your diet

"Everyone wants to put their best foot forward, so it's easy to come in and say you've started an exercise program when it really didn't happen," says Goldberg. "But just saying you exercised doesn't improve your cardiovascular health."

In fact, it could be harmful, says Stein.

"If a patient tells me they don't have chest pains, but they are doing nothing in terms of physical activity, then I'm not getting an accurate picture of the shape their heart is really in," he explains. "I may want to do a stress test to see what really happens when you exercise."

Hennecy offers one other piece of advice. She says if you feel uncomfortable talking with your doctor about your health, then change doctors.

Find a cardiologist in your state

"I used to postpone my checkups because I was ashamed or too embarrassed to get on the scale, and I butted heads with my doctor about my weight loss."

It's much simpler "facing the elephant" when you feel comfortable.

"Find a doctor that you have a good working relationship with, that you trust and who listens," she says. "That makes it easier to open up and be honest."