Study supports use of 2 controversial treatments for chronic fatigue 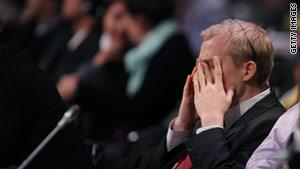 The results of the clinical trial were published in the British journal The Lancet.
STORY HIGHLIGHTS
RELATED TOPICS

(CNN) -- British researchers reported Friday that two controversial treatments for chronic fatigue syndrome appear to be more effective than a third, more commonly accepted treatment, and none of them appears to be linked to major safety problems.

In the clinical trial, whose results were published in the British journal The Lancet, 640 patients with CFS were randomized to one of four treatment groups. For 52 weeks, all of them got specialist medical care.

The study was carried out because previous trials supporting cognitive behavior therapy and graded exercise therapy were small and controversial: Two British patients' organizations had surveyed their members and concluded the interventions were not only ineffective, but were harmful, said Dr. Michael Sharpe, professor of psychological medicine at the University of Edinburgh and one of the study's authors.

As an alternative, he told reporters in a news conference posted on the internet, the patient groups were expressing a preference for CFS patients to see specialists and undergo another intervention, called adaptive pacing therapy.

The non-rehabilitative pacing treatment helps patients live within the limits imposed by the illness rather than attempting to break through those limits.

It considers CFS to be an organic disease process that cannot be reversed by changing behavior and that leaves patients with a finite amount of energy. Advocates of the treatment urge patients to pace themselves to avoid fatigue. A therapist advises patients on how to prioritize what they do, but urges them not to try to over do it.

The other two therapies push patients to try to overcome the limits of the illness: cognitive behavior therapy considers CFS to be reversible and recommends changes in behavior and cognition to gradually increase physical and mental activity. Advocates of graded exercise therapy seek to help patients gradually increase their energy level by challenging themselves to boost their exercise and other activity.

But the patient groups' anecdotal conclusions that cognitive behavior therapy and graded exercise therapy were detrimental did not hold up when subjected to the scrutiny of the rigorously designed study, which was carried out at six centers.

There was no statistical difference among the groups in serious adverse reactions, which ranged from 1% to 2%.

"We suggest that these findings show that either CBT(cognitive behavior therapy) or GET (graded exercise therapy), when added to SMC (specialist medical care), is an effective treatment for chronic fatigue syndrome, and the size of this effect is moderate," the authors wrote.

"This is something which has a useful effect for a substantial proportion of the people, but it's clearly not the final solution to the illness," Sharpe said.

The need for reliable treatment data is undisputed. In Britain, CFS is estimated to affect about 250,000 people. Symptoms typically include severe fatigue so disabling that it prevents patients from leading normal lives. It is commonly also associated with difficulties in concentration and memory as well as other symptoms, such as disturbed sleep and widespread pain.

"If people are left untreated, the prognosis is very poor," said Professor Trudie Chalder, professor of cognitive behavioral therapy at Kings College London and another author of the study.

Fewer than 10% of patients recover without treatment, said Sharpe.

The British government was the primary funder of the study, which had limitations, since it excluded patients who were too sick to get to the hospital, the authors acknowledged. In addition, they noted, measurement of outcomes was subjective.

Though the trial shows that recovery from CFS is possible, "there is clearly room for improvement with both interventions," wrote researchers Sijs Bleijenberg and Hans Knoop of the Expert Centre for Chronic Fatigue at Radbourd University Nijmegen Medical Center in the Netherlands.

In an accompanying commentary, they called for more work to come up with better interventions.

The president and CEO of the Chronic Fatigue and Immune Dysfunction Syndrome Association of America, Kim McCleary, said the study focused on treatments that many in the United States have no access to.

"I think it would be challenging, at least in the U.S. system, to purchase the services that they've tested in this trial," she said in a telephone interview.

The alphabet soup of acronyms that represent the interventions used in Britain is "just not something that our health care service offers, is reimbursable, or is really available here," McCleary said.

The report comes as researchers have been making progress on the possible role of viruses in causing the disease, she noted. "It's kind of a shame that we're still limited to talking about approaches to coping mechanisms as the only therapy that's available," she said.

A 2007 study by the Centers for Disease Control estimated that approximately 2.5% of the adult population of Georgia suffers from CFS.

McCleary said national estimates put the number of Americans with CFS at 1 million to 4 million.