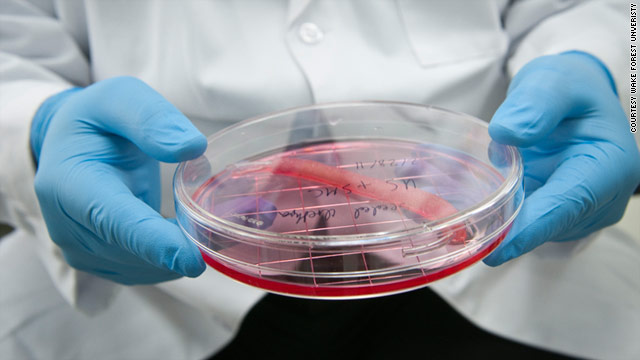 The urethra is a narrow tube that connects the bladder with the genitals, providing a conduit to usher waste out of the body.
STORY HIGHLIGHTS
RELATED TOPICS

(CNN) -- Engineering organs begins with something missing -- a phantom organ in the body that causes a patient incredible discomfort, dysfunction or pain. It ends with a Star Trek-esque feat of engineering where missing organs are replaced using cells culled from a patient's own body.

In a small pilot study, published Monday in the Lancet, scientists reported successfully reconstructing urethras in five young patients, using their own cells.

"We were able to create patients' own tissue that actually belongs there," said Dr. Anthony Atala, lead author of the study and director of the Institute for Regenerative Medicine at Wake Forest University School of Medicine. "If the tissue is supposed to be there, hopefully we will do better by the patient."

Patients had their engineered urethras implanted between March 2004 and July 2007 at the Federico Gomez Children's Hospital in Mexico City. Their urethras continued to function after several years' follow-up.

The urethra is a narrow tube that connects the bladder with the genitals, providing a conduit to usher waste out of the body. When it is damaged -- sometimes congenitally, or as result of disease, pelvic fractures or other traumas -- it is usually replaced using tissue harvested from the lining of a patient's cheeks or using skin grafted from another area of the body, according to Atala.

"Unfortunately for the narrow structures in the body (like urethras), they are kind of complex because they tend to collapse," said Atala, who added that conventional urethra replacement fails more than half the time. "Every organ has its own challenges."

The challenge with traditional urethra replacement is creating a viable tube, one that will not easily collapse. And that is where engineering urethras may offer some benefit.

The first step for engineering a new urethra is to take a very small piece of the patient's own tissue (around half the size of a postage stamp) from the bladder area. Cells are scraped from the biopsied tissue, allowed to multiply, after which muscle cells are separated from urethral cells.

It is the next few steps in the process that sound like science fiction. When there are a sufficient number of cells, scientists "seed" them -- much like you would seed a new lawn -- onto a mesh scaffold that is shaped like a urethra. The inside of the mesh is coated with urethral cells while the outside gets muscle cells.

"It's like baking a layer cake, but doing it one layer at a time," said Atala.

The seeded structure is placed in an incubator for about two weeks, in a "cooking" process that Atala says simulates how cell growth occurs inside the body. After that, the newly engineered urethra is ready to be implanted into the patient.

"During the surgery, we go to the area that has been damaged, clean out scar tissue and plug in a new, engineered urethra," said Atala. "It sounds easy but it is a fairly complex surgical procedure. This is a narrow structure and it has to fit just right."

According to the study, the engineered grafts appeared normal about three months after they were implanted. Patients' urethras functioned normally within a few weeks after surgery and maintained that function for up to six years.

"This is an exciting study showing that tissue engineering can be a viable option for complex urethral repairs," said David A. Vorp, a professor of bioengineering and cardiothoracic surgery at the University of Pittsburgh, who was not involved with this study. "It shows that the patient's own cells can be utilized, which will eliminate the possibility of rejection."

Vorp added that biopsies carry their own risks, such as infection and other complications, and that the study needs to be replicated in a larger study group. Although the current study had few patients enrolled, Vorp said it represents "a significant step toward an important new means for urethral repair."

Atala concedes that it will be several years before engineering organs becomes the norm, and that it is not yet clear whether this same technology will work in adults. He said that in addition to patients with urethra dysfunction, patients with other, complex small vessel problems -- such as blood vessels that collapse after heart bypass surgery -- could one day profit from this technology.

"There is a huge population with small vessel disease where the vessels keep collapsing and occluding," said Atala. "The main concept here is a narrow tubularized, complex structure that doesn't collapse long-term."

Atala and colleagues reported similar success in seven spina bifida patients to replace their dysfunctional bladders in 2006. Scientists at Wake Forest have successfully engineered more than 30 tissues and organs, including miniature livers, heart valves -- even printing organs such as human skin and kidneys -- in the lab.

Scientists like Atala say regenerative medicine represents a new frontier in medicine that could see doctors curing, rather than merely treating, diseases using the body's natural ability to heal itself. Autologous cells -- or cells that come from a patient's own body -- allow organs to be transplanted without rejection.

Still, all of that is many years away. Most of these burgeoning technologies are not yet ready for widespread implantation, and the cost of regenerative medicine at this early juncture is often much higher than conventional procedures.

"An interesting challenge with a lot of these technologies and with regenerative medicine is you have to go slow," said Atala. "The key is to go slow and have long-term follow-up. Keep patient safety first."