Teach your child to handle anger 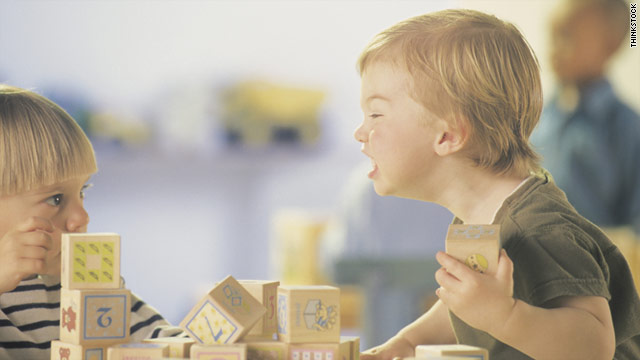 (Parenting.com) -- When my eldest daughter, Olivia, neared 2, she started hitting me. All sorts of injustices could elicit a serious whack from my formerly angelic child -- announcing it was bathtime, say, or my wearing the wrong shade of lipstick. Being an enlightened mother, I checked my impulse to swat back; instead, I said, "We don't hit people" and told her to use her words.

Eventually, the smacking ceased, but the emphasis on words backfired. Olivia would creep up on me, and in a subdued voice she'd confess: "Mommy, I want to hit you."

The way kids express anger evolves much as they do, from uncivilized to articulate. And although it's one of the most unsettling emotions a parent can deal with, childhood wrath is as natural (and useful) an emotion as love. "Anger can serve an important function -- it's energizing. When we're mad about something, it can help us solve a problem. It's the same for kids," says John Lochman, Ph.D., professor of clinical psychology at the University of Alabama and a specialist in youth aggression.

So don't tell your little one that she shouldn't flare up, no matter how inconsequential the matter seems to you. But neither should she be allowed to express her anger by becoming aggressive or hysterical. Watch your own temper too -- if you shout and curse every time another driver cuts you off, why shouldn't your child do the same when she's upset?

Luckily, you can teach kids constructive ways to let off steam, starting from infancy.

Whether it's anger or frustration, infants have only one major tool to express any kind of negative feeling: crying. And the most frequent tear trigger is having their needs go unmet.

Some kids, like some adults, are naturally more hot-tempered, while others require a lot to set them off. (In fact, up until age 5, temperament is the biggest factor in how easily a child gets mad.) Once you've identified your child's specific triggers, sometimes you can avoid overstimulating him or doing things that will upset him. At the very least, it'll help you keep his short fuse in perspective.

Trying to reason with a baby will get you nowhere, but it's never too early to empathize. "Let's say you're strapping your seven-month-old into his car seat, which he hates, and he starts screaming," says Suzanne Stutman, a mother of three, a family therapist, and the director of the Institute for Mental Health Initiatives at the George Washington University, in Washington, DC. "Say, 'I know how much you hate the car seat and I don't blame you, but I need to keep you safe.' He won't understand what you're saying, but he'll sense your tone. And it will set him up for expressing himself verbally in the future."

Olivia's 21-month-old sister, Lucy, dislikes being confined in her stroller, but food is a good way to get her to cooperate. I'll ask her, "Want some Veggie Booty? If you sit, I'll get some for you." Toys usually work too.

Parenting: Quirky ways to get your kids to behave

Bagels and cream cheese. Hepburn and Tracy. Toddlers and unbridled rage. All of them are naturals together. Just ask Kate Steinberg of Brooklyn, NY, about her 2-year-old son, Jack: "One evening he refused to get ready for bed and curled up like a hedgehog. Then I started to pull off his slippers and he became totally hysterical."

Though it sure feels like it, your little darling isn't doing this on purpose (really). Toddlers want things the way they want them when they want them, and they have zero inhibition when expressing their fury. They're also profoundly frustrated by all the skills they haven't yet mastered. (How would you feel if you couldn't put on your own socks?)

It's fine to empathize, but draw your line in the sand now. When something's totally unacceptable, such as biting or hitting, the response should be a clear statement: "No biting or hitting." If the behavior continues, just remove your child from the situation.

Steinberg's solution was to give her son a choice. "I said, 'I'm going to count to three, and if you don't get up, you won't get a bedtime story.' I had to get to three, but then he held out his arms so I could put on his pajamas."

And if you're on the receiving end of a pint-size punch, it's not a bad idea to show your displeasure by speaking sternly or making a face. "When a child finds out that certain things make you mad, it's a good lesson for her," says Henry Shapiro, M.D., medical director of the developmental pediatrics department of All Children's Hospital, in St. Petersburg, FL. Just make sure that you respond immediately to the specific behavior and not to the fact that your child is having a fit. For example, you can say that it's okay to be angry but it's not okay to bite you.

At 2, a child can start to learn about using language to express feelings, but you'll probably still need to show her how. Saying "You're angry because I won't buy you a lollipop" helps her make sense of how she feels. Then you can explain briefly why she can't have that lollipop and try to soothe her -- by holding or rocking her or distracting her with something else.

No matter how verbal your child is, remember that she's still little. Expecting a toddler to always chew with her mouth closed or to want to share her toys during every playdate is unfair. It can get to the point where the only reaction she has left is anger, because she just can't do what you're asking. And avoid lengthy rehashing of outbursts or tantrums. Your toddler doesn't have the skills to recall what she did, much less why she did it. Once her rage has passed, let it go.

Kids this age are stuck in a kind of emotional limbo, between a toddlerlike self-centeredness and a growing empathy for others. It's true their language skills are more sophisticated, and they know how to express themselves -- and how to manipulate adults -- more effectively, but they struggle with some of the same issues younger kids do, including wanting to do things they aren't able to or not knowing how to act on their own behalf without being aggressive.

"Children experiment with different behaviors. One day they may show that they're mad by using their words; another day they may do it by knocking something off the table," says Dr. Shapiro. And the more attention they get for acting badly, the more they're likely to continue to do it.

Just like their younger sibs, 3- to 5-year-olds are prone to fits when their basic needs aren't met. A universal case in point: It's normal for kids in preschool or daycare to control their temper there -- where they may not know how much they can get away with -- and to let loose once they get home, where they know they're unconditionally loved. Dr. Shapiro advises immunizing a preschooler against such routine outbursts by setting aside about 20 minutes a couple of times a day to get down on the floor and play with him. What else helps? Give him the attention he craves by noticing his good behavior whenever possible.

You can also finally take advantage of your child's growing facility with language to teach him self-control. So if you've been lackadaisical about this, really emphasize the "use your words" approach when conflicts arise. Kids should start to be able to tell another child that they want the truck or that they need an adult to help them with something rather than resort to hitting.

Give him a say

Sometimes a practical solution to common triggers will head off an explosion. Ellen De Money, a mother of three in Boulder, CO, lets her kids decide between two options. "Jordan, my four-year-old, will often get angry over having to share a toy with his brothers," she says. "So I tell him they must either put the toy away or use the timer. Then each of them can play with the toy for four minutes."

Ariel Carter, 7, hates to be told to help clean up the house. "The last time we got into one of these fights, she drew a picture of her outstretched palm, wrote 'Go away' on it, stomped over to my desk to get some tape, taped it to her door, and shut herself in her room," says her mom, Lylla, of Water Mill, NY.

Don't be a drill sergeant

Not wanting to comply with orders is a big reason for a lot of struggles at this age, so make sure you're not bossing your child around all the time. Set clear rules about what needs to get done, but within that framework, give her more control over her own routines, such as doing homework or getting ready for bed. For example, you can let her choose whether she wants to play before she does her schoolwork or after the job is done.

Pick up on her feelings

Kids may become frustrated and angry if their parents aren't sensitive about the issues most important to them: a growing awareness of their body and social pressures like bullying or teasing. Your child's social skills are mature enough so that she can learn how to avoid conflict with others. If the boy sitting next to her in school always picks on her, for instance, let her know that she can ask the teacher to have her seat changed.

To help defuse impending rage, help your child identify the physical feelings that accompany it, like a racing heart or faster breathing. Before she loses control, suggest she do something to calm down, such as take deep breaths, count to ten, or quietly sing a song. (These strategies, in simplified form, can also work with preschoolers.) Next time fury strikes, she may be able to turn to these techniques herself.

Praising your grade-schooler goes a long way toward reinforcing the ways you want her to act. "You expect an eight-year-old to have a certain degree of patience and self-control," says Dr. Shapiro, "but you have to remember to acknowledge it." Focus on the specific behavior and say something like "You were really patient with your brother when he was messing with your toys. I liked the way you were gentle and didn't lose your temper."

Olivia, now 6, stopped hitting me a long time ago (and -- fingers crossed -- no longer even wants to, either). These days, it's Lucy I have to watch out for.