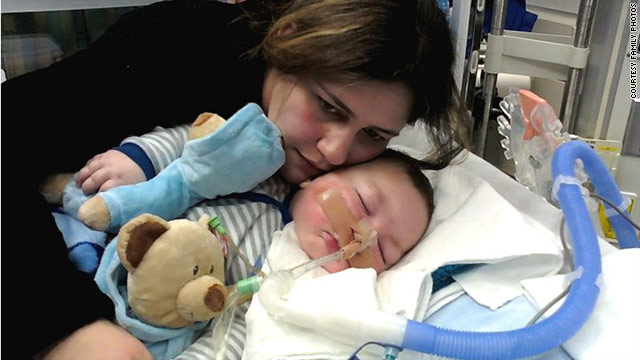 Baby Joseph Maraachli, a Canadian citizen, has been admitted to a hospital in St. Louis. His parents have been fighting to have their son admitted to a U.S. hospital.
STORY HIGHLIGHTS

(CNN) -- A 1-year-old suffering from a deteriorating neurological condition whose family had been in an ongoing debate with a Canadian hospital about his care has been transferred to a children's hospital in the United States.

Joseph Maraachli, widely known in the media as Baby Joseph, was airlifted on Sunday evening to SSM Cardinal Glennon Children's Medical Center, a Catholic hospital in St. Louis, where he is being examined by Dr. Robert Wilmott, the hospital's chief of pediatrics, hospital spokesman Bob Davidson said.

A team of physicians will formulate a treatment plan and provide an update on what's next for the child in a news conference Tuesday morning, Davidson said.

Baby Joseph, who was born in January 2010, had been in the care of the London Health Sciences Centre in London, Ontario, since October. His doctor, in court papers, said that "all cranial nerve functions are now absent" and there is no hope for recovery. He recommended that the infant's breathing tube be removed and he be allowed to die.

The child's parents, Moe and Sana Maraachli, sought instead to have their son receive a tracheotomy combined with continued mechanical ventilation so that he could be transferred home, where he would be cared for by his family. The child's Aunt, Samar Nadar, has said that in 2002 the Maraachli's daughter died at home with a tracheotomy after suffering a similar condition.

In January a Canadian Superior Court judge ruled in favor of the hospital, saying it could remove the child's breathing tube without a replacement, along with a do-not-resuscitate order and recommendations on palliative care.

The Maraachlis then been fighting to have their son relocated to a U.S hospital for a second opinion.

The London hospital said it would not perform a tracheotomy because it is an invasive procedure typically recommended for patients who require a long-term breathing machine. In a statement on the hospital's website, it says Baby Joseph's transfer on Sunday happened "despite the strongest possible medical advice to the contrary from medical experts."

The Maraachli case gained the attention of pro-life groups including Priests for Life and the Terri Schiavo Life and Hope Network, who organized prayer vigils and rallies in support of the family. The situation intensified in February when the hospital began receiving threats and increased security to protect its staff.

Father Frank Pavone, national director of Priests for Life, flew to Ontario Sunday night to help with the transfer. He issued a news release saying: "After around-the-clock negotiations, this really became a race against time."

Joseph "needs to be in a hospital that cherishes life over the bottom line," he said.