For mental health, bad job worse than no job 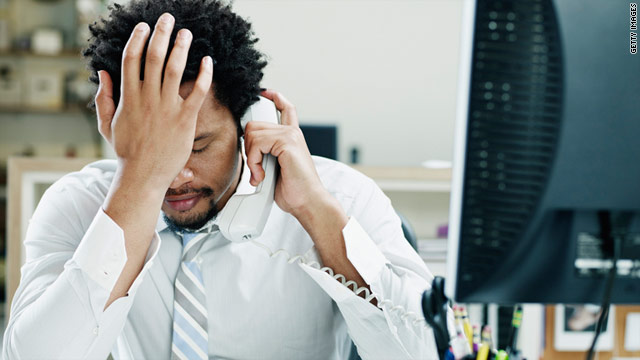 Research shows that being out of work is associated with a greater risk of mental health problems.
STORY HIGHLIGHTS
RELATED TOPICS

(Health.com) -- With unemployment still high, job seekers who have been discouraged by a lack of work might be inclined to take the first opportunity they're offered. That will help pay the bills, but it could cause other problems: A new study suggests that some jobs are so demoralizing they're actually worse for mental health than not working at all.

The findings add a new wrinkle to the large body of research showing that being out of work is associated with a greater risk of mental health problems. In the study, which followed more than 7,000 Australians over a seven-year period, unemployed people generally reported feeling calmer, happier, less depressed, and less anxious after finding work, but only if their new jobs were rewarding and manageable.

"Moving from unemployment to a poor-quality job offered no mental health benefit, and in fact was more detrimental to mental health than remaining unemployed," says the lead author of the study, Peter Butterworth, Ph.D., a senior research fellow at the Centre for Mental Health Research at the Australian National University, in Canberra.

The study was published in the journal Occupational and Environmental Medicine.

Butterworth and his colleagues analyzed data from an annual survey in which participants described their mental state, their employment status, and -- or those with a job -- details of the working conditions that they enjoyed (or didn't enjoy, as the case may be). The survey respondents were asked how strongly they agreed with statements such as "My job is complex and difficult" and "I worry about the future of my job."

The researchers focused on four job characteristics that are closely linked with mental health: the complexity and demands of the work, job security, compensation, and job control (i.e., the freedom to decide how best to do the job, rather than being ordered around).

Unemployed people who found a job that rated well in these areas reported a substantial improvement in their mental health. By contrast, newly employed people who felt overwhelmed, insecure about their employment, underpaid, and micromanaged reported a sharp decline in their mental health, including increased symptoms of depression and anxiety. Even those who couldn't find a job fared better.

This last finding was "striking," Butterworth says. "This runs counter to a common belief that any job offers psychological benefits for individuals over the demoralizing effects of unemployment."

Although certain types of jobs -- such as working in a customer-service call center -- are more likely to be downers, the working environment tends to have a greater impact on mental health than the job description itself, Butterworth adds.

Managers are especially important to employee well-being, says Robert Hogan, Ph.D., an expert on personality in the workplace and a former chair of the department of psychology at the University of Tulsa. "Bad bosses will make anybody unhappy," Hogan says. "Stress comes from bad managers."

Policy-makers should address the impact that the workplace has on mental -- and not just physical -- health, Butterworth says. "In the same way that we no longer accept workplaces that are physically unsafe or in which employees are exposed to dangerous or toxic substances, there could be a greater focus on ensuring a more positive psychosocial environment at work."