Cereal may help ward off hypertension 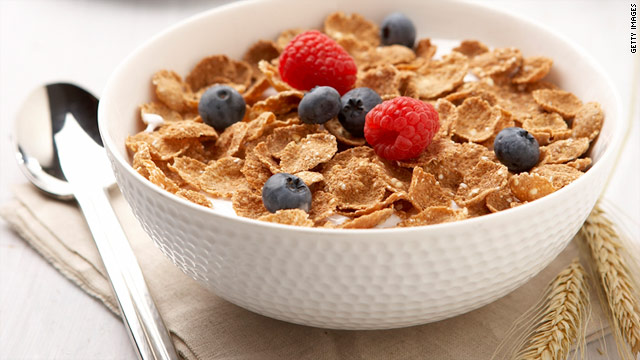 (Health.com) -- Starting each day with a bowl of cereal -- especially a whole-grain variety -- could trim up to 20% off your risk of developing high blood pressure, according to preliminary research presented Tuesday at an American Heart Association meeting in Atlanta.

High blood pressure, or hypertension, can be caused or worsened by a range of factors, including obesity, lack of exercise, too much sodium, and stress. Although cereal alone won't keep blood pressure in check, eating it regularly may be an easy and practical way to prevent hypertension, the researchers say.

"Cereal is something that people can easily get into their diet and that they enjoy," says lead researcher Jinesh Kochar, M.D., a geriatric specialist at Beth Israel Deaconess Medical Center, in Boston. "And it costs a lot less than the drugs you'd have to take if you had hypertension."

Cereals made from whole grains appear to protect against hypertension slightly more than those made from refined grains (which have had their fiber- and nutrient-rich parts removed), the study found.

Julie Miller Jones, Ph.D., a professor of nutrition at the College of St. Catherine, in Minneapolis, says that cereal may be a better source of whole grain than bread and other foods because of how it tends to be served. "Usually with cereal you don't add a source of saturated fat, while you might add something like sausage to bread," says Jones, who points out that the study did not control for saturated-fat intake. Jones was not involved in the new research.

In addition, the nuts, raisins, or fruit often added to cereal contain fiber and potassium, both of which can help lower blood pressure. Milk's effects on blood pressure can't be discounted either, Jones says. "It may be more about the way you put the breakfast together than anything magical about breakfast cereal."

Kochar and his colleagues analyzed data on more than 13,000 men who were part of the long-running Physicians' Health Study, which is funded by the National Institutes of Health. All the participants had normal blood pressure and averaged 52 years old at the start of the study. Over the next 17 years, more than half developed hypertension.

Compared with men who never ate cereal, those who averaged one serving per week had a 7% lower risk of hypertension. Those who consumed cereal more frequently had even greater reductions in risk: Two to six weekly servings were associated with an 11% lower risk, and one or more servings per day were associated with a 19% lower risk. (To pinpoint the effect of the cereal, the researchers took several other risk factors for hypertension into account, including age, smoking history, fruit and vegetable consumption, and physical activity.)

Although the food questionnaires used in the study did not ask about specific brands of cereals, popular brand-name cereals made from refined grains include varieties of Corn Flakes, Special K, and Rice Krispies, while examples of whole-grain cereals include Cheerios, shredded wheat, and bran.

Health.com: 10 heart-healthy rules to live by

More research will be needed to determine whether cereal is associated with a lower risk of hypertension in women, too, Kochar says. Although previous studies have shown that women derive heart benefits from whole grain, the findings can't be immediately generalized beyond men.

Roughly 1 in 3 adults in the U.S. has hypertension, which is a major risk factor for heart attacks, strokes, and kidney problems. The AHA estimates that hypertension costs the country an estimated $90 billion in health-care and other costs each year.

Kochar presented his findings at the AHA's annual conference on nutrition, physical activity, and metabolism. Unlike the studies published in medical journals, the research presented at the meeting has not been thoroughly vetted by other experts.