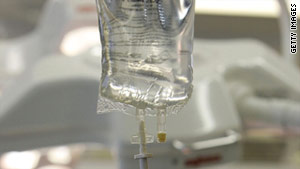 (CNN) -- Nine of 19 patients who were infected with bacteria that got into their blood after they were fed intravenously have died in six Alabama hospitals, state health officials said Tuesday.

"This represents an example of an outbreak that does, unfortunately, occur," Dr. Don Williamson of the Alabama Department of Public Health told reporters in a conference call.

The bacteria, identified as serratia marcescens bacteremia, can prove fatal, though investigators -- including those from the Centers for Disease Control and Prevention -- have not determined that they caused the deaths, he said, adding that the investigation is ongoing.

The rod-shaped bacteria that were discovered in bags used in intravenous feeding -- also referred to as total parenteral nutrition -- would have entered the bloodstream easily and "with a pretty quick effect in terms of blood pressure and temperature," he said.

But the products no longer pose a threat to anyone who has not already been identified, he added. The product, which was recalled last Thursday, was available from only one manufacturer and sold to the hospitals; it was not clear how many people in all had been administered the solution, he said.

All but one of the hospitals were in the Birmingham area, said Dr. Jim McVay, director of health promotion and chronic disease with the Alabama Health Department. He identified them as Baptist Princeton, Baptist Shelby, Medical West, Cooper Green Mercy and Select Specialty.

The other hospital was identified as Baptist Prattville, 80 miles south of Birmingham. There is no indication that any of the hospitals erred, McVay said.

The outbreak was identified March 16 when two hospitals reported unusual cases of bacteria among high-risk patients -- an outbreak that had begun in late January, McVay said.

Williamson praised those involved. "This is actually the way the system should work," he said. "In this case, a couple of hospitals identified that they were seeing what they perceived to be an unusual number of cases of serratia marcescens bacteremia. When they saw that, they contacted us and the CDC and we contacted the CDC and very quickly you got the shutoff of the production of the product, the cessation of use of the product and then you quickly got an investigation done to identify both what the most likely source was as well as where the source came from and some idea of the magnitude of the problem."

The manufacturer, Birmingham-based Meds IV, had shipped its product to all six hospitals, McVay said. The company did not immediately return a call.

Patients who get the product are typically already very sick, McVay said. Some of the 10 surviving patients who were infected with the bacteria remained hospitalized Tuesday, he said.