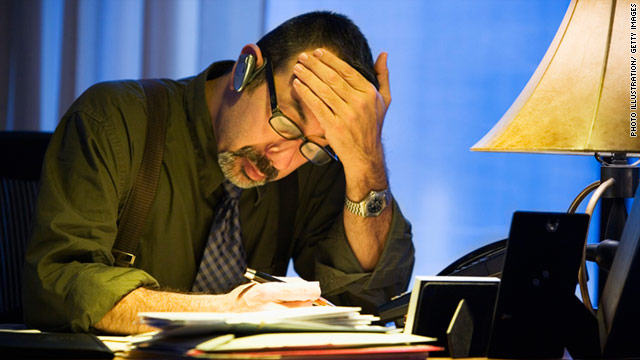 People who work an average of 11 or more hours per day have a 67 percent higher risk of suffering a heart attack.
STORY HIGHLIGHTS
RELATED TOPICS

(Health.com) -- While you may consider yourself lucky to be working long hours -- or working at all -- in the current economy, your diligence may be undermining your health in the long run.

Work schedules may be an overlooked and underutilized early warning sign for heart disease, the researchers say.

If doctors simply asked their patients "How many hours do you work?" during office visits, an additional 5 percent of the people who have heart attacks each year might be identified beforehand as being at risk, says the lead researcher, Mika Kivimäki, Ph.D., a professor of epidemiology and public health at University College London.

Routinely burning the candle at both ends may not increase heart risk by itself, but it may be an indicator of an unhealthy lifestyle in general, according to experts who weren't involved in the research. The study didn't show a cause-and-effect relationship between long hours and heart attacks, they point out, and the apparent link could be due to a number of complicated health factors, including stress, lack of exercise, and eating high-calorie takeout rather than healthy home-cooked meals.

"Somebody who works hard may eat fast food and not be very active, so it may not be the long hours that give them heart disease," says Stephen Kopecky, M.D., a cardiologist and professor of medicine at the Mayo Clinic, in Rochester, Minnesota. "It's eating fast food and being inactive."

The study, a new analysis of a larger, long-running study known as Whitehall II, followed more than 7,000 healthy, middle-aged civil servants in the U.K. for an average of 12 years. More than half (54 percent) of the participants reported working seven to eight hours a day, while roughly 15 percent and 10 percent said they worked 10- and 11-hour days, respectively.

The new findings suggest that work hours should be added to the standard list of risk factors for heart disease, the authors say. These factors -- which include age, sex, cholesterol levels, blood pressure, and history of smoking -- are combined in what's known as the Framingham risk score, a 10-year estimate of heart-disease risk named after a multigenerational study in Framingham, Massachusetts.

Scott Shurmur, M.D., the director of preventive cardiology at the University of Nebraska Medical Center in Omaha, notes that the study did not include information about the participants' diets, activity levels, or family history of heart disease, and says that it may be premature to change current practice. "It makes sense," he says, "but it's hard for me to lay a specific cause and effect on working long hours when we know so little else about the patients."

And the findings may not translate to all ethnic groups and nationalities, says Robert Scott III, M.D., an associate professor of internal medicine at Texas A&M Health Science Center College of Medicine, in Temple. "This looked at civil-servant workers in Britain who were largely white males and at low risk," he says. "That limits the analysis."

What's more, the type of work, and how much you enjoy it, may make a big difference, Kopecky says. While sitting behind a desk for 11 hours may be unhealthy, farmers are notorious for working 12 or even 14 long, hard hours a day -- and they tend to live longer than average, he says.