Miranda Lambert is having a moment 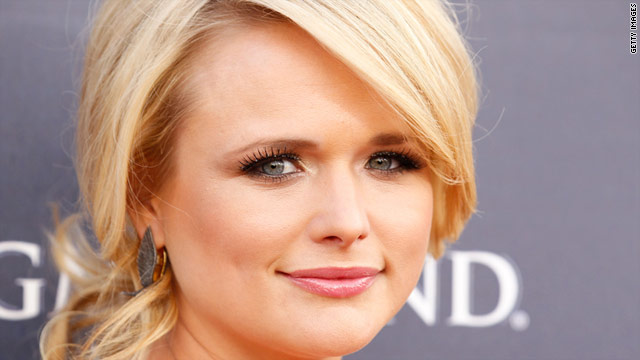 Miranda Lambert and her trainer do circuit training, lunges, and crunches and walk every morning for 30 minutes.
STORY HIGHLIGHTS

(Health.com) -- Miranda Lambert may have forgotten to thank her fiancé, fellow country music star Blake Shelton, when she won her first Grammy this February.

But when we caught up with the 27-year-old star on her tour, Blake was top of mind. In fact, the Texas native was thrilled to chat about everything, from her energy secrets to how she's getting into peak shape to swap "I do's" with Blake this month.

Q: You're in Evansville, Indiana, now. Do you ever get confused about which city you're in?

A: Yes! They usually write where we are on the set list, because I've made the mistake of saying the wrong state before. I was like, "Hello, Ohio!" And they just kind of looked at me like my head was on fire. [Laughs.]

Q: And how do you keep your energy up on stage?

A: I eat a lot of protein and eat pretty clean. Junk food drags you down. I try not to have anything less than two hours before I go on stage, because I don't want to be up there all bloated. I basically have a grilled-chicken salad after the show, and that fills me up.

Q: You have a trainer with you on the road, right?

A: Yeah, I wanted to get in better shape and wanted to keep it going for the wedding. We do a lot of circuit training, lunges, and crunches. And every morning we walk for 30 minutes.

Q: Your parents were private eyes who ran an agency from home. It sounds like a TV show!

A: It does. But to us [back then], it was just my parents' job. I did surveillance a lot, which sounds exciting, but it never was. If there was no babysitter, I'd have to go, and my brother and I would just lie in the backseat and color for 15 hours while my mom watched the house.

Q: Did you know what your parents were doing, exactly?

A: In a way, I had such a normal life. But in another way, I saw things most kids don't see. Our dinner conversations weren't about school and homework; they were about child custody cases or divorce. When I was a teenager, my parents took in victims of domestic abuse, which was definitely eye-opening. I had to share my room with a woman and her kids who had been abused.

Q: What was the healthiest thing about your childhood?

A: We had a farm and a garden, and for about two years we literally lived off the land. We raised rabbits and chickens, and also had our own hogs that we slaughtered. We didn't really go to the store for anything besides milk. My mom would say, "Go pick out what you want for dinner," and we'd go in the garden and get whatever vegetables we wanted. It was really old-school and really awesome.

Q: Was it hard slaughtering animals that were your pets?

A: Dad would give us two rabbits as our pets, or we'd have one pig we could name. They explained that not every animal was a pet -- some were providing for our family. It sounds weird to other people, but I look at it like, there are some animals you feed and some animals that feed you.

A: [Blake and I are] both pretty good. We have a lot of catfish, and everybody knows the best way to eat catfish is fried. I tried to be healthy and bake it once, which was horrible. We ordered a pizza!

Q: How did you know that Blake was the one?

A: The first day I met him, I knew he was really special. We balance each other out. He's constantly joking, and I'm more serious. He can make me laugh at any point. Especially when I'm trying to be mad, he'll go, "Are we in a fight?" And then I'll start laughing and go, "I guess not now."

Q: He must understand the pressure of being in the public eye. It's not enough anymore to just be a singer -- you have to look great, too. Is that tough?

A: Absolutely. The bigger you get, the more pressure you have to deal with. The hard part is I'm a normal-size girl, and I'm fine with that. All these stars are so tiny, and they spend their lives trying to be skinny. I want to look my best, but I'm not a model. I'm not an actress. I'm representing normal girls. It's OK to have a little bit of curve. I'm happy with my body. So many girls come up to me and say, "Thank you for being normal," and I'm proud of that.

Q: Do you guys want kids?

A: We have seven dogs, so we're just taking care of them. They're all rescues, and all crazy-looking. Every animal is named after a song or an artist -- Delta, Delilah, Cher, Jessi, Waylon, Virginia Bluebell, and Black Betty. We have so much going on right now, we're gonna wait awhile. The dogs are really good birth control!