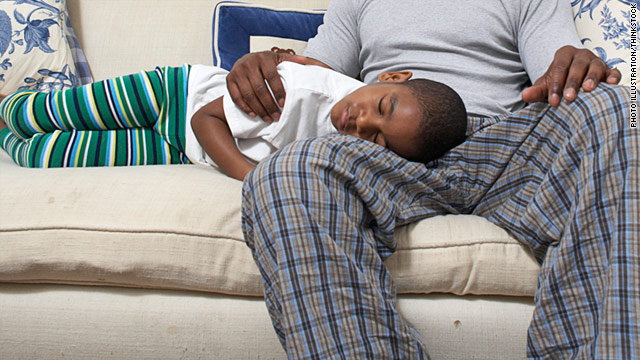 Kids that don't get the recommended nine hours of shut-eye can be tired, cranky, wired and aggressive.
STORY HIGHLIGHTS
RELATED TOPICS

(Parenting) -- The blare of the burglar alarm catapulted Kathleen Manzo out of bed. Her heart beating wildly, Manzo feared for the safety of her two kids.

But her husband sensed a less menacing possibility, and, sure enough, when they peered outside their Silver Spring, Maryland, home, there was son John, then 7, in his pajamas, standing barefoot on the lawn, sound asleep.

It wasn't the first time John, now 10 years old, had wandered in slumber, although he'd never left the house before. His parents turned him around and tucked him back into bed, and, come morning, John didn't remember a thing.

"We always set the alarm now -- not to prevent strangers from getting in but to alert us when our son sleepwalks out," Manzo says.

Parents often think kids' sleep problems are over once their babies slumber through the night, but at least a quarter of school-age children have nighttime troubles, says Gregory Stores, M.D., emeritus professor of developmental neuropsychiatry at Britain's University of Oxford.

It's more than an issue of parent sanity -- when kids don't get the recommended nine or more hours (depending on their age) of shut-eye, they're not only tired, they can be cranky, wired, and aggressive.

Adequate slumber is also key if you want your basketball fiend to have the stature of LeBron James: Growth hormone is secreted mostly at night.

Read on for expert tips to stop common sleep stealers.

"They often have learning and behavior problems, and they're at increased risk for higher blood pressure," says Judith Owens, M.D., author of Take Charge of Your Child's Sleep.

Parenting.com: Why kids get sicker at night

A recent study of healthy elementary school kids found a quarter had mild apnea (often caused by chronic sinus infections); 1 percent suffered severely. Obesity, the usual trigger in adults, sometimes plays a role, but the likeliest cause is oversize tonsils or adenoids.

Spot it: Kids with apnea usually breathe noisily or snore. Your sleeping child's chest may also move vigorously or his head tip back in a groggy attempt to get more air.

Snooze saver: The only way to confirm apnea is to visit a sleep lab. It's treated by removing tonsils and adenoids or by helping your child shed excess pounds. Sinus medication may help, as might sleeping with the head propped up.

They don't obsess about job loss or a withering 401(k), but school-age kids have their own anxieties, such as being unpopular, flunking an exam, even disappointing you.

Scary real-life possibilities (burglars, fires) also can keep them up, says Fran Walfish, Psy.D., a pediatric psychotherapist in Beverly Hills, California. Kids used to sleeping with you may get anxious when made to go solo.

Spot it: Your child is exhausted but won't close her eyes, or suddenly gets a stomachache at bedtime. She may ask for a glass of water or one more hug after lights-out; a kid who won't sleep alone will complain or cry when you leave.

Snooze saver: Try not to judge or berate her for causing the problem ("If you'd practiced, you wouldn't be scared of your upcoming recital"), says Susan Zafarlotfi, Ph.D., clinical director of the Institute for Sleep-Wake Disorders at Hackensack University Medical Center, in New Jersey.

Instead, have her purge her worries into a journal. "Writing helps get things out so you don't take them to bed," Zafarlotfi says.

Encourage her to deal with lingering fears in the morning. If they persist or seem severe, talk to your pediatrician.

As for breaking the sleep-with-Mom habit, it may be easier now than when she was younger, says Ronald Becker, M.D., a sleep expert at Children's Hospital Boston.

Parenting.com: When to test for ADHD

Kids over 5 are eager to please and can often be enticed by rewards, especially if they have a say in what they will be (within reason!). When Woodside, California, mom Dana Sanderson asked her daughter Kit, then 6, what would help her sleep alone, Kit decided she needed a bigger night-light and a "Mommy pillow," a body pillow with her mom's image traced in fabric paint. Sanderson agreed, and soon had her evenings back.

Not enough exercise and/or too much computer time

Active kids tend to be better sleepers. When New Zealand researchers monitored 7-year-olds to measure activity during the day and sleep at night, they found that for each hour of inactivity, kids took three minutes longer to fall asleep.

Playing on the computer just before bed can also cause trouble, partly because the screen's glow can disturb natural sleep/wake cycles.

Spot it: Your child spends the first half of the day sitting at school, the second half in front of the TV or computer.

Snooze saver: Add more activity to his day. If he's not involved in any sports, consider trying one out, or simply limit screen time and send him outside. (Ideally, though, exercise should end several hours before bedtime so he has time to unwind. If the timing of a sporting event prevents this, just limit activity once the game's over.)

Any physical problem -- an upset stomach, a strained muscle -- can rouse your child. But the most common culprits are allergies, asthma, and (especially among the overweight) reflux.

Asthmatic and allergic kids who seem fine during the day can experience nighttime troubles because inflammation increases and airways narrow then, explains Julian Allen, M.D., division chief of pulmonology at Children's Hospital of Philadelphia. Meanwhile, lying down triggers reflux.

Spot it: Despite going to bed at a reasonable hour, your kid is exhausted and cranky in school, or often nods off before dinner (school-age kids who get sufficient sleep seldom need naps, Dr. Becker says). You may hear coughing or wheezing at night, or see puffy eyes or a runny nose come morning.

Snooze saver: Soothe known physical ailments before bedtime. If her asthma isn't completely controlled, ask your doctor about anti-inflammatory drugs such as inhaled corticosteroids or long-acting bronchodilators, Dr. Allen says. Talk to her doctor about allergies or chronic indigestion.

Between 20 and 40 percent of school-age kids sometimes sleepwalk, says Karen Ballaban-Gil, M.D., a pediatric neurologist at The Children's Hospital at Montefiore, in New York City. The culprit: an incomplete sleep-stage transition that causes the brain to remain asleep while the body is able to move around.

Spot it: Typically, sleepwalking occurs in the first few hours after bedtime. It also tends to run in families.

Snooze saver: He'll likely outgrow this; in the meantime, keep him safe by clearing toys off floors, covering hot radiators, putting bars on bedroom windows (kids can unlock them while asleep), and installing locks high on front and back doors.

If you catch your kid sleepwalking, gently guide him back to bed. (You can try to wake him, but it's often difficult.) If it happens frequently, talk to your pediatrician.

When he's trying to fall asleep, he's hit with a tingly sensation and the need to move, a condition known as restless leg syndrome (RLS).

In a related disease, periodic limb movement disorder (PLMD), the legs twitch or kick during sleep. Both tend to run in families and may be tied to a shortage of iron, folic acid, or the brain chemical dopamine.

Spot it: He'll fidget, or complain of a "creepy" feeling in his legs at bedtime or even when he's sitting still.

Snooze saver: Ask your pediatrician to test your child's blood iron and folic acid levels; if they're low, supplements may help. For mild cases, massage his legs or use a heating pad before bed. Severe cases may benefit from medication.

Wean caffeine. Kids don't drink coffee, but there's plenty of caffeine in soda and chocolate candy. If your child is sensitive, cut out caffeine sources after lunch.

Stick to a regular bedtime and wake time. "Most kids adapt easily if a bedtime is missed once a week, but more often, and you're asking for trouble," Dr. Becker says.

Limit cell phones. Research from Wayne State University found that adults who were exposed to radiofrequency waves (similar to the ones emitted by cell phones) for three hours before bedtime had a shortened deepest-sleep stage -- the time when the body repairs damaged cells. Be sure your child stops texting and talking early in the evening.

Skip scary movies. They're not only arousing, they can lead to nightmares. Unsettling nighttime dreams also result from a child's real fears, so open a dialogue (in the light of day) about anything troubling him.

Bedtime cues are helpful. End every day the same way: A bath, a snuggle, or a book will come to signal sleepytime.