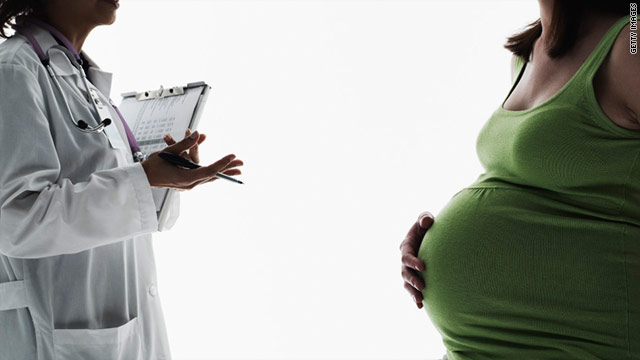 Breast cancer is one of the more common cancers found in pregnant women.
STORY HIGHLIGHTS

(Health.com) -- When she found the lump in her breast, Jessica Denton had known she was pregnant with her first child for just a few days.

Her primary care doctor (she hadn't yet signed up with an obstetrician) told her not to worry, that the small, hard mass she felt was most likely a blocked milk duct.

Denton put her misgivings aside, and over the following months she watched with delight as her belly began to swell.

But the lump was growing, too. Finally, five months along, Denton pointed it out to her OB, who immediately ordered a needle biopsy. The result: malignant. Hanging up the phone, "I felt like I'd been shot," Denton recalls. "How could I possibly have cancer?"

It's an agonizing paradox: At the very moment a woman is giving life to a child, she must fight a potentially deadly disease.

Usually, it's simply a terrible accident of timing: The pregnancy has nothing to do with the cancer's emergence.

(For example, studies suggest that breast tumors found during pregnancy are more likely to be hormone-receptor negative, meaning they are not fed by pregnancy's higher levels of estrogen and progesterone.)

Health.com: 5 simple things that could cut your breast cancer risk

Cancer of any kind is found in an estimated 1 in 1,000 pregnancies, making it relatively rare. But the incidence of cancer in pregnant women appears to be on the rise, probably because of the growing number of women who delay childbearing.

"As women age, their odds of developing cancer go up -- so if they wait until their 30s or 40s to have a baby, it's more likely that a pregnancy and a cancer diagnosis will happen at the same time," explains Jennifer Litton, M.D., a breast medical oncologist at M.D. Anderson Cancer Center in Houston, Texas, who treated Jessica Denton.

Litton adds, "The good news is that we can treat the woman without harming the fetus." For the most part, that means proceeding with cancer treatment even as the pregnancy continues.

This wasn't always the case. Not so long ago, women were routinely advised to delay treatment until after the baby was born -- or to terminate the pregnancy and begin the regimen immediately, out of concern that pregnancy would promote the growth of the cancer and even put the woman's life at risk.

But research conducted over the last few decades has shown that this is not the case. For example, a recent study led by Litton found that women who were pregnant while receiving care for breast cancer did as well as, and in some cases better than, women who weren't pregnant during treatment.

Doctors also worried that the fetus would be harmed by the harsh drugs used to treat cancer.

"Thirty years ago, there was almost no information on how children with prenatal exposure to chemotherapy turned out," says Elyce Cardonick, M.D., a maternal-fetal medicine specialist at Cooper University Hospital in Camden, New Jersey. "Today we know that it's relatively safe after the first trimester."

(That said, there are still situations where treatment just isn't compatible with pregnancy.)

Now more than ever, women have the chance to conquer their cancer -- and have a healthy baby, too.

Since every pregnancy brings physical changes -- your breasts swell, your joints ache, your skin may develop blotches or stretch marks -- the symptoms of cancer can easily be overlooked.

Still, Jessica Denton knew something was not right. "I'd never been pregnant before, so at first I took my GP's word for it that the lump was probably just a blocked duct," she says. "But it seemed to be getting bigger, so I trusted my instincts and showed it to my obstetrician."

Health.com: How to do a breast self-exam

If you find a suspicious lump when pregnant, you can have an ultrasound, which involves no radiation, or even a mammogram, which is considered safe as long as the patient's abdomen is properly shielded. (Breast cancer is one of the more common cancers found in pregnant women, along with cervical cancer, thyroid cancer, melanoma, and lymphoma.)

Other tests -- such as a Pap smear for cervical cancer or a lymph node biopsy for lymphoma -- are also safe.

For women who get the dreaded positive result, the next steps are determined by the type of tumor -- how big it is, how much it has spread, how fast it's growing -- as well as by the gestational age of the fetus. In Denton's case, time was of the essence. "My cancer was extremely fast-growing, so we needed to start treating it right away," she says.

Denton's physicians decided that she would receive chemotherapy during pregnancy and a mastectomy after the birth. Other women with cancer may undergo surgery while pregnant.

Pregnant women can receive general anesthesia without harming the fetus, and surgery isn't substantially riskier in pregnant women, as long as the surgeon and anesthesiologist take the pregnancy into account.

Most forms of chemotherapy are also -- surprisingly -- considered to be relatively safe. "I was blown away when I heard that I would be getting chemo," Denton says. "Here I am, avoiding caffeine and alcohol, and the doctors are going to put that poison in my body?"

In truth, experts don't yet fully understand how much of the chemotherapy drugs administered to a pregnant woman reach the fetus. Chemotherapy is typically delayed until after the first trimester, when the majority of the fetus's organs are formed, and stopped three to four weeks before delivery.

To minimize the chances of harming the fetus, doctors avoid medications known to cause birth defects and those too new to be declared safe during pregnancy. Pregnant women generally receive the same dose, adjusted for weight, that nonpregnant patients would get, Cardonick says.

Of course, these women are painfully aware that they are different from other cancer patients. "Let me tell you, you get some funny looks when you go in for chemo­therapy with a big, round belly," says Sandi Bender.

Bender was a 32-year-old mom in Macomb, Illinois, just seven weeks pregnant with her fourth child, when she was diagnosed with Hodgkin's lymphoma. For three years, she'd been feeling an uncomfortable pressure in her throat.

She'd gone from doctor to doctor; finally, an endocrinologist she consulted ordered an MRI, which showed a tumor spreading across her neck and chest.

"When I heard the news, I was in shock," Bender says. "My first thought was, Am I going to lose the baby?"

Her oncologist told her she could go forward with both the pregnancy and cancer treatment; another oncologist she consulted for a second opinion advised her to end her pregnancy, because of the potential risks to the fetus.

"The tumor was wrapped around my veins, and the doctors told me they couldn't operate," she says. "We had to go straight to chemo."

Her cancer was so advanced that her doctors recommended taking the unusual step of beginning her chemotherapy during her first trimester. Even so, "Ending the pregnancy was out of the question for me," Bender says. "I just tried to have faith that everything would work out."

Experts say that these days it's rare for a woman with cancer to be counseled to end a pregnancy. However, "the decision to terminate can often expand the options for treatment, since some drugs can be used only if the patient is not pregnant," says Paniti Sukumvanich, M.D., a gynecologic oncologist at Magee-Womens Hospital in Pittsburgh, Pennsylvania.

He adds, "It's a very personal decision, and there is no right or wrong answer."

Fear for the future

Bender began chemotherapy when she was around 10 weeks pregnant. The drugs made her tired and nauseated, on top of the exhaustion she felt from pregnancy. "The fatigue knocked me out," she remembers. "I spent a lot of time in bed, and my husband would bring my kids into the bedroom to visit with me."

But by far the worst part, these women say, is the harrowing anxiety. Heidi Floyd was two months pregnant with her fourth child when she felt a lump in her breast.

"My arm brushed against it when I was changing a sheet on a bed," says Floyd, who lives in Warsaw, Indiana. "Right away, I knew there was something wrong."

A lumpectomy later confirmed that the mass was malignant, and within two weeks Floyd was receiving chemo. Her own mother had died of breast cancer at age 42; Floyd was just 38.

"Having lost my mom so young, I was afraid I wouldn't be around to take care of my children," she says. "One evening after I put my kids to bed, I took a shower and just slumped down in the stall, saying over and over, 'Please, please, please ...' "

Floyd was also thinking ("every minute") about how her baby was faring.

"There's one particular chemo medication, Adriamycin, that people call 'the red devil,' because it's red, and its side effects can be very harsh," she says. "Whenever it went into my body, the baby went crazy, kicking and moving. I'd think, Oh, God, I hope he's OK."

On April 2, 2005, Floyd gave birth to a baby boy, Noah, now 6 years old and thriving. "At first I was praying he would be born healthy," she says. "Then I upped that to: Please, just let him make it to kindergarten. Well, he'll be starting first grade this fall, so now I'm rooting for college!"

Health.com: How to stay healthy after breast cancer

For a number of years, researchers have been collecting information on how intrauterine exposure to chemotherapy affects children, both around the time of birth and into childhood and adolescence.

"The majority seem to do just as well as other children -- their health, their intelligence, their development is fine," Cardonick says. Many of these babies are born early, though, often because labor is induced.

"We try to deliver the baby as soon as it's mature, so that the mother's treatment can continue without worrying about the fetus -- usually around 36 weeks," Sukumvanich says.

Postpartum treatment often includes radiation, which in most cases is not safe to administer to pregnant women, though it can be given to women who are breast-feeding. (Women who are receiving chemotherapy are advised not to breast-feed.)

Sandi Bender and Jessica Denton are now in remission; Floyd recently had a bilateral mastectomy after finding another mass in the same breast as her original tumor. Their children are all doing great.

Their advice for women confronting the unthinkable: "You're in a battle for your life and your baby's life, and you need doctors who will fight as hard as you," Floyd says. "Don't stop searching until you find a team that will back you up."

Doctors say it's also important to be well-informed and as healthy as possible before getting pregnant. It's a good idea to schedule a preconception checkup. (Over 40? Ask your doctor if you should have a mammogram, too.)

If you have a strong family history of cancer, consider genetic counseling to assess your personal risk. Once you're pregnant, report anything unusual -- a thickening or lump, an irregularly shaped or pigmented mole, unexplained pain or pressure anywhere in your body -- to your doctor.

And if your OB isn't worried but you are, seek a second opinion.

Jessica Denton's daughter, Avery, is now 2. When Avery was born, she says, "I thought: Take that, cancer. You tried your best, but I won: I have her." Now Denton is engaged in the ultimate act of hope: She is pregnant again.

For her, research brings reason for optimism -- becoming pregnant after treatment for breast cancer does not seem to decrease long-term survival, and may even have a protective effect against future recurrence of cancer. Her second child is due in October.

"So far," Denton says with a smile, "it's been much easier this time."