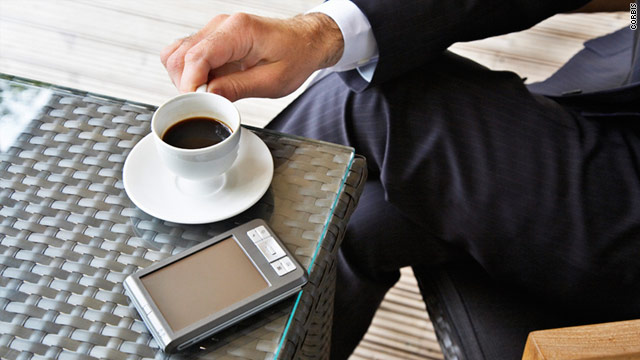 Coffee is an important source of antioxidants and also has positive effects on glucose metabolism and insulin levels.
STORY HIGHLIGHTS

(Health.com) -- Men who drink a lot of coffee might feel a bit jittery or high-strung, but those side effects may come with a hidden benefit: prostate health.

According to a new study, drinking six or more cups of coffee per day can lower a man's risk of fatal prostate cancer by up to 60 percent.

A decreased risk of cancer was seen in men regardless of whether they drank decaf or caffeinated, which suggests that the benefit may come from a property in coffee other than caffeine, researchers say.

"Coffee has a lot of different biological effects and several of them seem like they might be relevant for prostate cancer," says the lead author of the study, Kathryn Wilson, a research fellow in epidemiology at the Harvard School of Public Health, in Boston, Massachusetts.

"It's an important source of antioxidants and also has positive effects on glucose metabolism and insulin levels, and it's thought that insulin plays a role in the progression of prostate cancer."

Coffee also appears to influence levels of testosterone and other sex hormones, which "clearly play a role in prostate cancer," Wilson adds.

The potentially beneficial effects of coffee have received a slew of attention from researchers in recent years. Coffee consumption has been linked to a lower risk of type 2 diabetes, Parkinson's disease, and liver cancer, among other conditions, and just last week, researchers in Sweden reported that women who drank at least five cups a day were at lower risk of developing a certain aggressive type of breast cancer.

Researchers have previously explored a possible link between coffee and prostate cancer, but those studies have had mixed results and tended to be small.

The new study, in the Journal of the National Cancer Institute, is the largest of its kind, involving about 48,000 men.

Health.com: Coffee -- is it healthier than you think?

Wilson and her colleagues analyzed data from the long-running Health Professionals Follow-Up Study, which has tracked the relationship between nutritional factors and cancer, heart disease, and other health conditions.

Every four years between 1986 and 2006, as part of regular diet questionnaires, the participants reported how much coffee they drank per day. During the follow-up period (which lasted through 2008), 5,035 men were found to have prostate cancer.

In 642 of those cases, the cancer was considered lethal, meaning that the tumors spread or the men died of the disease. Coffee consumption was linked to only a slightly lower risk of all prostate cancers, but the change in risk was pronounced for lethal cancer.

As with other questionnaire-based studies of coffee consumption and disease, the results do not prove that coffee directly prevents aggressive prostate cancer.

The study shows only an association, although it is a relatively strong one, since the researchers were able to take into account detailed information on the men's overall diets and other factors that can affect prostate-cancer risk, such as a family history of prostate cancer, smoking, obesity, and physical activity.

Still, Shiuan Chen, Ph.D., director of tumor cell biology at the City of Hope Cancer Center in Duarte, California, says the evidence isn't compelling enough for doctors to recommend that middle-aged men up their coffee intake.

"I don't think it's any reason for changing habits in the immediate moment," he says.

Wilson and her colleagues aren't certain how coffee might fend off aggressive prostate cancers but not others, although they suspect that insulin levels -- which respond to coffee intake -- are likely involved.