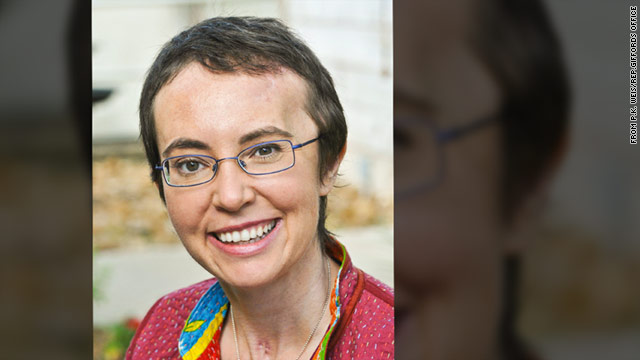 (CNN) -- The smiling photos of U.S. Rep. Gabrielle Giffords released Sunday, the first of her face since she was shot, capture the congresswoman's resilience, her spokesman said.

"I've seen her approximately once a month since she went to Houston, and every time I hear, I see ... tremendous improvement and I think these pictures really capture the resilience of Gabby Giffords," spokesman C.J. Karamargin told CNN. "She has a positive attitude. She is upbeat. And she is determined to recover as quickly as she can."

The photos, published on Giffords' Facebook page, were taken on May 17 -- the day before she underwent skull surgery at TIRR Memorial Hermann Hospital in Houston, according to a message posted alongside the images.

May 17 was also the day after Giffords, D-Arizona, attended the launch of the space shuttle Endeavour. Her husband Mark Kelly was commander of the mission.

Taken outside, the photos show the congresswoman relaxed and smiling. She has short hair and is wearing glasses. One photo shows her alone, smiling at the camera; in the other, she is sitting alongside her mother.

They are the first photographs of Giffords' face since she was shot in the head in January and show how far she's come since then.

But he cautioned the congresswoman still has many challenges ahead. He characterized her recovery as a "marathon," not a sprint.

"People shouldn't get the wrong impression," he said. "The congresswoman suffered a severe injury to one of the most sensitive areas to the human body. Her road to recovery is going to be a long one."

Giffords is expected to leave TIRR Memorial Hermann Hospital and begin outpatient therapy in Texas by the end of the month, Karamargin said.

Prior to Sunday, Giffords' office had released a photo of just her hand, holding her husband's hand.

The photographer responsible for the new pictures said they were taken at the hospital.

"It was very inspiring to see how much she had recovered in 4 1/2 months," photographer P.K. Weis of SouthwestPhotoBank.com said in a statement. "I was excited to see her and to see her smile. She was glad to see me, was in a good mood, smiling and laughing and seemed to enjoy the experience. I certainly did, too."

Weis, who's known the congresswoman for more than a decade, said "her staff asked me to do it because she wanted someone who was not a stranger -- someone she would be comfortable around."

"You are so special," another fan, John Evanchik, wrote. "And you have so much courage and fortitude that I am so proud to say that you are a real role model for so many people who, in their circumstance, they probably give up, but not you, Congresswoman. Yes, God has blessed you."

Six people were killed and 13 others, including Giffords, were wounded when a gunman opened fire in front of a Safeway grocery store in Tucson, Arizona, on January 8.

Jared Lee Loughner, 22, is charged in the mass shooting. A federal judge ruled last month that he is not competent to stand trial, based on the results of court-ordered medical evaluations of Loughner.

The U.S. attorney general will take custody of Loughner for a period not to exceed four months, during which he will be taken to a hospital for further evaluation to determine if he will become competent to stand trial. Prosecutors said Loughner could be readied for competency through proper medication, and this practice has proved successful in other cases.