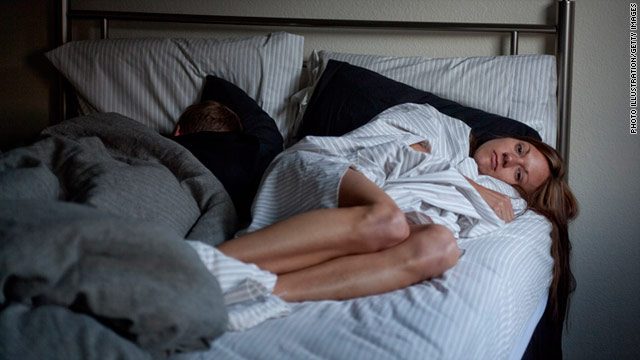 The person you share your bed with each night can have a significant influence on your own sleep quality.
STORY HIGHLIGHTS

(Health.com) -- The snooze button on your alarm clock may not be the only casualty of a sleepless night.

A new study of married couples suggests that when wives have trouble falling asleep, the quality of their relationship with their husband suffers.

The longer it took women to drift off, the study found, the more likely both partners were to report negative interactions with their spouse -- such as feeling ignored or criticized -- the following day.

The same wasn't true for the men, however. The researchers found no relationship between the amount of time it took a husband to fall asleep and the couple's interactions the following day. So why didn't the husbands' sleep affect next-day interactions, too?

Health.com: 8 factors that could be keeping you awake at night

"There is some evidence to show that women tend to be more communicative and expressive in relationships and men may be more repressive," says the lead researcher, Wendy Troxel, Ph.D., an assistant professor of psychiatry and psychology at the University of Pittsburgh. "After a bad night of sleep, women may be more likely to express irritability or frustration, whereas men might be more likely to withhold that."

Are we getting enough sleep?
RELATED TOPICS

Research on sleep problems such as insomnia has tended to focus on the individual who is directly affected, Troxel and her colleagues note. But, they add, their findings suggest that sleep problems should perhaps be viewed -- and treated -- in a broader context that takes into account the patient's relationships and social interactions.

"Sleep doesn't occur in a vacuum," says Lauren Hale, Ph.D., a sleep expert and associate professor of preventive medicine at Stony Brook University, in New York. "It's embedded in the social world, and particularly relevant to one's romantic relationships."

Health.com: Which sleep position is healthiest?

Hale, who was not involved in the new study but has researched the effect of social factors on sleep, says that the person you share your bed with each night can have a significant influence on your own sleep quality.

Troxel presented preliminary results from the study at an annual meeting of the Associated Professional Sleep Societies in Minneapolis on Monday. Unlike studies published in medical journals, the findings have not been thoroughly vetted by other experts.

Over the course of 10 nights, Troxel and her colleagues gauged the sleep quality of 35 married couples using an actigraph, a watch-size monitor that records patterns of rest and activity. (None of the participants had been diagnosed with a sleep disorder or other serious medical problems.)

In addition to measuring the amount of time it took each partner to fall asleep, the researchers also looked at their total sleep time and the number of times they woke up during the night.

On average, both partners were likely to report more negative and fewer positive interactions when the woman had trouble falling asleep the previous night. Though the researchers identified no link between the husbands' sleep and marital interactions, they did find that men tended to sleep for less time than usual after a day of positive interaction with their spouses.

In this case, getting less sleep isn't necessarily a bad thing; in fact, Troxel says, it could even indicate intimacy, rather than sleep, in bed.

Although more research is needed to explain how exactly marriages and sleep quality interact, the study highlights that sleep problems can potentially harm relationships and need to be treated, Troxel says.

"Maybe this [study] will be a wake-up call," she says. "This might be a really important indicator to get treatment for sleep disorders, not only because they can affect relationships, but also because spouses can be important reminders and instigators to get treatment."