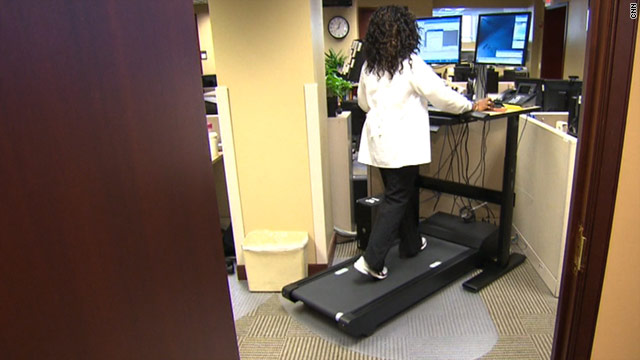 (CNN) -- Sitting too much will probably shorten your life.

That might sound ridiculous -- or obvious -- depending on your perspective, but the findings don't come from a fringe study. They come from the American Cancer Society, whose researchers studied 123,216 people's health outcomes during a 14-year period.

That large study focused on the numbers of people who died. Other studies have focused on specific conditions affecting the most Americans, things such as cardiovascular disease, obesity, type 2 diabetes and depression. In those studies, too, extended periods of sitting increased risks of illness.

And earlier this year the evidence against many hours of sitting expanded further: The American Journal of Epidemiology published a study finding that those who work a sedentary job have almost twice the risk of a specific type of colon cancer.

What's particularly interesting about recent research is the revelation that sitting for extended periods of time does significant damage to human health that cannot be undone by exercising. Sitting for several hours each day is bad for you, like smoking is bad for you, regardless of whether you do healthful activities, too.

The American Cancer Society points out that public health guidelines make little or no reference to reducing time spent sitting, instead focusing on increasing the activity level.

With what we now know, public health guidelines should address both physical activity and physical inactivity, according to public health researchers.

It's a shift in thinking that is rippling through places of work, schools and homes as the very fundamentals -- chair at desk -- seem to cause harm when used for the lengths of time now considered normal.

The Occupational Safety and Health Administration recommends mixing noncomputer-related tasks into the workday, so that you're moving and using different muscle groups.

In fact, occupational sitting time is where the epidemiology of physical activity first began, writes one researcher in the British Journal of Sports Medicine.

In the decades that followed, researchers and policy makers focused on the health benefits of getting exercise. But according to the latest research, even when people do significant and regular exercise, they still increase their risks of serious illness from hours of physical inactivity.

These findings are also consistent with lifestyles in so-called "Blue Zones," places such as Okinawa, Japan, and Sardinia, Italy, where people live much longer on average than the rest of the developed world. In addition to plant-based diets and strong communities, near-constant moderate physical activity is the norm in these areas. 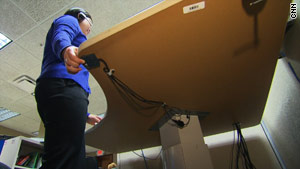 Adjustable desks allow employees to either sit or stand.

More Americans are adapting modern work environments to suit these physiological needs better by installing standing and adjustable desks that allow for switching between sitting and standing positions, and treadmill desks, which operate at low walking speeds.

One such place, the Georgia Poison Center in Atlanta, first installed adjustable desks to allow employees -- who sit for most of the day answering phone calls -- to stand up when they choose. Gaylord Lopez, the center's director, considered the change a success and now has treadmill desks in the office, too.

"If I can keep someone healthy, I'm going to have a work force that's productive, that's not going to cost me any more money in terms of overtime," Lopez says. "Hopefully, they'll be happy; they'll want to keep on working for us."

In the November issue of the journal Diabetes, Dr. James Levine, an endocrinologist at the Mayo Clinic in Rochester, Minnesota, and a leading researcher in the field, points out that sitting has a biological function rooted in evolutionary need -- it's almost as energy efficient as lying down, but while seated, a person can be vigilant of his or her surroundings.

"Sitting is not bad for you in moderation, but in excess it is addictive and harmful," Levine writes. "Of concern is that for most people in the developed world, chair-living is the norm."