Would your doctor pay for wasted time? 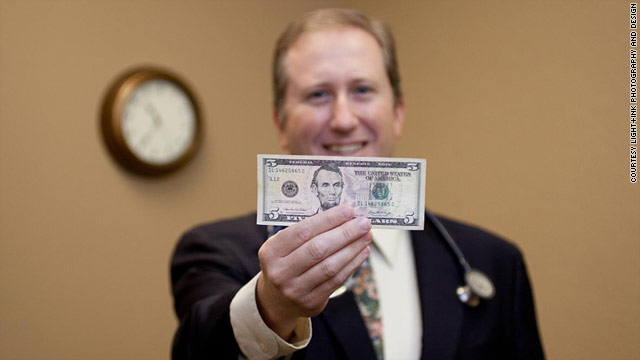 Dr. Timothy Malia of Fairport, New York, gives his patients $5 if they wait longer than 15 minutes for their appointments.
STORY HIGHLIGHTS
RELATED TOPICS

(CNN) -- Elaine Farstad got antsy as she waited for her doctor, who was late for her scheduled appointment. Then she got downright impatient. Then, as nearly two hours passed, she got mad. Then she came up with an idea.

"I decided to bill the doctor," she says. "If you waste my time, you've bought my time."

When Farstad returned home, she figured out her hourly wage working as an IT specialist at Boeing in Everett, Washington. She doubled it for the two hours she'd spent in the waiting room, and mailed the invoice to her doctor.

"It's ludicrous -- why would I wait for free?" says Farstad, who is now an engineering graduate student at North Carolina State University. "Like we all learned in kindergarten, it's about respecting each other."

In years gone by, doctors would likely have scoffed at the suggestion they reimburse patients for time spent waiting. But Farstad's doctor sent her a check for $100, the full amount she requested, and some tardy doctors tell CNN they give patients money (or a gift) before the patient even asks.

"I love this!" says Dave deBronkart, co-chair of the Society for Participatory Medicine. "It's magnificent that some physicians are valuing patients' time. It's a commitment to designing a practice that truly serves patients."

The average wait time at doctors' offices in the United States is 24 minutes, according to a report released in 2010 by Press Ganey, a group that researches health care performance.

When he keeps patients waiting more than 15 minutes, Dr. Timothy Malia, a primary care physician in Fairport, New York, hands them a $5 bill. If patients in Eugene, Oregon, wait more than 10 minutes to see Dr. Pamela Wible, they receive a handmade soap or a bottle of lotion. When Dr. Cyrus Peikari, an internist in Dallas, recently had to miss a day of work because of a family emergency, he gave the patients whose appointments he canceled $50 at their next appointment.

One patient didn't want to take the check, but Peikari insisted. "I suggested to him, 'Your time is just as valuable, if not more so, than mine.' "

Not all doctors are so sympathetic. Farstad tells about another appointment. It was for 8 a.m. with her gynecologist, and she had to leave at 8:40 a.m. when the doctor still wasn't there. In the parking lot, she ran into the doctor, who was just getting out of her car.

"The doctor told me she had a little one and she was never in the office until ten to nine," she remembers. "I asked her why she scheduled appointments at 8 a.m., and she said to give the patients time to do paperwork. I was so mad I was shaking. I never went back to her."

What to do when your doctor keeps you waiting

Keep in mind that sometimes a situation is out of a doctor's control. For example, some doctors are instructed by their bosses to book patients at 15 minute increments to make more money, which means if one patient needs more time, the patients later in the day will get delayed.

If that's the case, and the doctor is perpetually late and you don't like waiting, you can try one of these approaches. 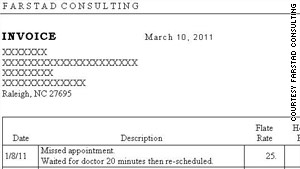 Of the six doctors Elaine Farstad sent an invoice to, three have paid.

1. Send your doctor a bill

Here's an example of an invoice Farstad sent to a tardy physician. She says over the years she has billed six doctors who were more than 30 minutes late, and half have paid.

This map shows physicians who adhere to the tenets of the Ideal Medical Practices Organization, which encourages its doctors to be on time.

For example, try booking the first appointment after lunch. For more scheduling tips, read the previous Empowered Patient column: Waiting for the doctor... and waiting and waiting.

4. Mention the doctors in this article to your own doctor

Doctors might pay up pre-emptively if they hear their colleagues are doing the same, deBronkart says.

5. Blog about your doctor's lateness

DeBronkart, who blogs as "E-Patient Dave," wrote about his experience waiting 45 minutes to get an X-ray. He says the head of the radiology practice then called him and acknowledged they needed to change the way they scheduled patients.