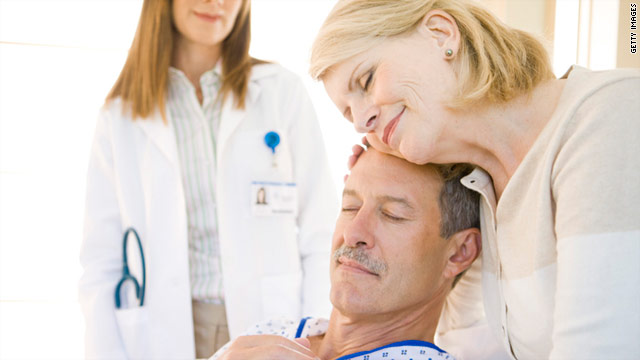 The study found that overall, married people got to the hospital an average of 30 minutes sooner than their unmarried peers.
STORY HIGHLIGHTS
RELATED TOPICS

(Health.com) -- Research suggests that marriage is good for your health -- especially if you're a man. Married men tend to live longer than their unwed counterparts, they're more likely to see their doctor regularly, and they even have a lower risk of dying from a heart attack or stroke.

Why? A new study may offer a clue: Men who experience chest pains while having a heart attack tend to get to a hospital sooner if they're married or in a common-law relationship.

A woman's marital status, by contrast, was not associated with how quickly she sought treatment after experiencing heart-attack-related chest pains, according to the study, which was published today in the Canadian Medical Association Journal.

One reason for this discrepancy may be that, traditionally, women tend to assume the caregiver role in a relationship and may be more likely to insist that their husbands seek medical care than vice versa, says the lead author of the study, Clare Atzema, M.D., a researcher at the Institute for Clinical Evaluative Sciences, a Toronto-based nonprofit organization that studies health care in Ontario.

The caregiving role many women play in their marriages is so ubiquitous and ingrained that a wife might not even need to be physically present during a heart attack to have a good influence on her husband, Atzema adds.

"The man, just knowing that when his wife gets back and finds out that he had a heart attack and waited five, six hours -- his anticipation of that may make him seek care more quickly and effectively than the actual chest pain will," she says.

Men are also more likely than women to deny or ignore physical symptoms -- both their own and those of their spouses, says Janice Kiecold-Glaser, Ph.D., a professor of psychiatry and psychology at the Ohio State University's Institute for Behavioral Medicine Research, in Columbus.

"There are stories about men running up flights of stairs to prove to themselves that they are not having a heart attack," says Kiecold-Glaser, who has studied the health benefits of marriage but was not involved in the new research. "In general, wives pay far more attention to husbands' health symptoms than vice versa, and there are clear payoffs for men as a consequence."

Married women, for instance, are more likely than married men to make sure that their spouses go to routine medical appointments and take prescribed medications, she says.

Atzema and her colleagues analyzed the medical records of 4,403 patients in Ontario who were admitted to the hospital after experiencing chest pains and subsequently treated for a heart attack. (Chest pains are a classic heart attack symptom, but they don't occur in all cases.)

Most men and women in this group, whose average age was 67, arrived at the emergency room within six hours of their first symptoms.

Specifically, three-quarters of married people sought treatment within that time frame, compared with 68% of single, 69% of divorced and 71% of widowed people.

Overall, married people got to the hospital an average of 30 minutes sooner than their unmarried peers.

Health.com: Why love is good for your health

After taking into account a range of potentially extenuating factors (including age, income, and various health measures), the researchers found that calling an ambulance was the only factor more closely linked to a person's arrival time at the ER than marital status. Not even a previous history of heart attack had as much of an impact.

When they looked closer, however, the researchers found that the treatment gap between married and non-married people applied only to men.

Atzema suspects that this pattern may become less pronounced over the next few generations, as gender roles evolve and become less defined.

As more men take on caregiver roles, more same-sex couples get married, and the idea that "men don't ask for directions" loses traction, she hypothesizes, the type of treatment gap seen in the study will begin to fall away as well.