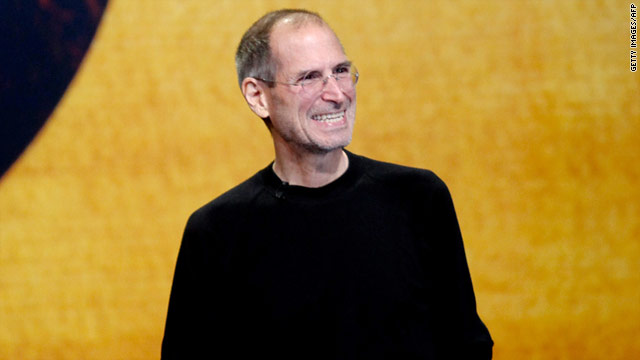 Steve Jobs has said he was once told he should "expect to live no longer than three to six months."
STORY HIGHLIGHTS

Editor's Note: The report was originally published August 25, 2011, the day after Steve Jobs stepped down as Apple CEO.

(CNN) -- Steve Jobs has been notoriously private about his health, but as he steps down as CEO of the company he helped invent and re-invent, speculation abounds that he has gotten very sick.

In his resignation statement, he alludes to his inability to continue in his role at the company.

"I have always said if there ever came a day when I could no longer meet my duties and expectations as Apple's CEO, I would be the first to let you know. Unfortunately, that day has come," Jobs wrote in a letter addressed to the Apple Board of Directors and the Apple Community.

Neither Jobs nor the company has revealed concrete details of his condition. Based on the public information about his health history, there are many possibilities, including cancer recurrence and liver transplant rejection.

Jobs revealed in 2004 that he had a pancreatic neuroendocrine tumor, kind of pancreatic cancer that tends to grow slowly. It's relatively uncommon, representing only 5% of all pancreatic tumors. Diagnosis usually happens when the cancer has advanced; tumors are often detected after the cancer has spread to the liver, said Dr. Craig Devoe, pancreatic cancer specialist at the North Shore-LIJ Health System in New Hyde Park, New York, who did not treat Jobs.

In a rare moment of openness about his condition, Jobs revealed a few details of his diagnosis in a 2005 speech at Stanford University's commencement ceremony.

Jobs recalled having a scan one morning in 2003 that showed a tumor in his pancreas and doctors telling him "this was almost certainly a type of cancer that is incurable and that I should expect to live no longer than three to six months."

"Later that evening, I had a biopsy, where they stuck an endoscope down my throat, through my stomach and into my intestines, put a needle into my pancreas and got a few cells from the tumor. I was sedated, but my wife, who was there, told me that when they viewed the cells under a microscope, the doctors started crying because it turned out to be a very rare form of pancreatic cancer that is curable with surgery. I had the surgery, and I'm fine now."

But the timing wasn't that clear-cut. In between diagnosis and surgery, he pursued an alternative therapy approach for nine months, hoping a special diet would allow him to avoid surgery, according to a 2008 Fortune magazine article.

On July 31, 2004, at the Stanford University Medical Clinic in Palo Alto, California, Jobs underwent surgery to remove his tumor.

"This weekend I underwent a successful surgery to remove a cancerous tumor from my pancreas," Jobs wrote in an e-mail to Apple's staff the next week. "I will be recuperating during the month of August, and expect to return to work in September."

Reports have suggested that this surgery was a Whipple procedure, a complex operation that involves removing the "head" of the pancreas in addition to the gallbladder and parts of the stomach, bile duct and small intestine. This can result in digestive problems and weight loss.

"The hope is that you remove all visible disease," Devoe said.

A timeline of Steve Jobs' career

Jobs said in January 2009 that doctors said he dropped so much weight because of "a hormone imbalance that has been 'robbing' me of the proteins my body needs to be healthy. Sophisticated blood tests have confirmed this diagnosis."

The former CEO never disclosed any more details; doctors unaffiliated with his care said a variety of conditions could have caused the weight loss, including cancer and diabetes.

If related to his a recurrence of his cancer, a pancreatic tumor would typically lead to an overproduction of hormones including glucagon, which results in weight loss if produced in excess, Dr. Jeffrey Mechanick said in 2009. Mechanick, a clinical professor at Mount Sinai Medical Center in New York, was not involved in Jobs' care.

The odds are against the pancreatic neuroendocrine tumor cancer patient who has a liver transplant, but close to half of the patients may be free of cancer four to five years after the transplantation, said Dr. Simon Lo, director of the Pancreatic and Biliary Diseases Program at Cedars-Sinai Medical Center in Los Angeles, who did not treat Jobs.

Still, relatively few liver transplants have been performed as a treatment for neuroendocrine tumors, making it a somewhat experimental option, Devoe said. If the patient has a lot of disease in the liver, it can extend life, but there's no guarantee that this will remove all of the cancer remaining in the body.

And immunosupression drugs required after a liver transplant could allow any remaining cancer to grow faster, Devoe said.

In rare cases, immune suppression itself can also cause cancer, said Dr. James Yao, oncologist at the University of Texas M.D. Anderson Cancer Center in Houston, who has not treated Jobs.

On the bright side, there are two new cancer drugs that have been approved this year that may apply to someone in Jobs' situation, experts say.

Everolimus is available to treat pancreatic neuroendocrine tumors and prevents transplant rejection. But there are serious potential side effects, which may include lung or breathing problems, infections and renal failure, which may lead to death.

Sunitinib malate is prescribed for the treatment of pancreatic neuroendocrine tumors, kidney cancer and GIST, a rare cancer of the bowel, esophagus or stomach. This too carries its risks; it can cause liver problems and death.

"The good news that this is an area where there are a lot of advances," Yao said.