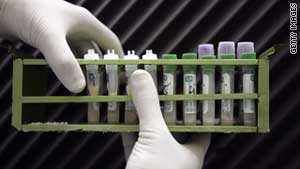 (CNN) -- Taiwan's health department is investigating how the organs of an HIV-positive donor were cleared for transplant for five recipients at two hospitals.

To restore confidence in organ transplants in Taiwan, Dr. Chiu Wen-Ta, minister of the health department, announced three task forces on Monday: an investigation team to find out what led to the incident and issue disciplinary actions; a victims' caregiving team to assist the patients and their families; and a medical consultant team to work with the hospital in monitoring the patients' health.

Taiwan Today, operated by the government information office, cited sources as saying the transplant team had misheard "reactive" as "nonreactive" in reference to the donor testing HIV-positive.

The sources, according to Taiwan Today, said the donor's family did not know of his HIV-positive status when they decided to donate his organs.

"The major fault lies in the failure to double-check the donor's blood test results before the surgeries," the Taiwan Today report cited National Taiwan University Hospital's spokeswoman as saying.

The donor has been identified as a resident from Hsinchu who fell to his death last week.

The National Taiwan University Hospital has apologized to the patients who received the transplants and administered them with HIV-prevention medicine.

Under regulations, HIV virus tests should be run before any transplant of organs, tissues, body fluid or cells take place, according to the health department. In the event of HIV-virus transmission as a result of a transplant, penalties for the procedure could result in a three-to-10 year prison sentence.

According to the Taiwan Organ Registry and Sharing Center, 7,536 candidates are on its waiting list; with those awaiting a kidney comprising more than three-fourths that number.

CNN's Shao Tian and Elizabeth Yuan contributed to this report.