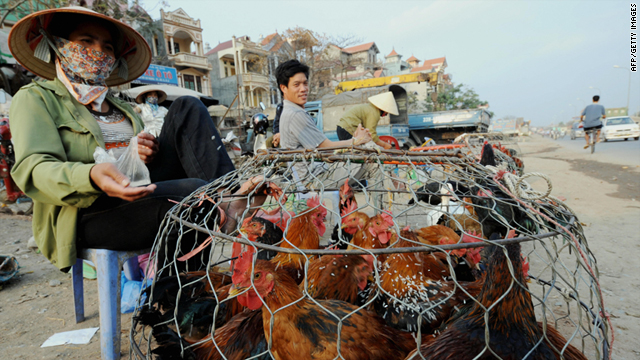 A vendor feeds her chickens on Hanoi's outskirts. Authorities fear a mutant strain of the H5N1 virus could spread from Vietnam.
STORY HIGHLIGHTS

(CNN) -- The United Nations warned Monday of a possible resurgence of the deadly avian flu virus, saying there are indications a mutant strain may be spreading in Asia.

A variant strain of the H5N1 avian influenza virus, which can apparently bypass the defenses of current vaccines with unpredictable risks to humans, has appeared in Vietnam and China, the Food and Agriculture Organization (FAO) stated.

Circulation of the virus in Vietnam threatens Thailand, Malaysia, Cambodia, Japan and the Korean peninsula, the FAO said.

The most recent death caused by avian flu occurred this month in Cambodia, where eight people have died after becoming infected this year, the organization added.

The World Health Organization (WHO) says the virus has infected 565 people since it emerged in 2003, causing 331 deaths.

Avian flu has also directly killed or required the culling of over 400 million poultry and caused economic losses estimated at $20 billion before being eliminated from most of the 63 countries infected at its 2006 peak.

A geographical advance in cases of infected poultry and wild birds since 2008 has apparently been due to the movement of migratory birds, said FAO Chief Veterinary Officer Juan Lubroth.

"Wild birds may introduce the virus, but peoples' actions in poultry production and marketing spread it," he said.