From iReporter to CNNer (and beyond) 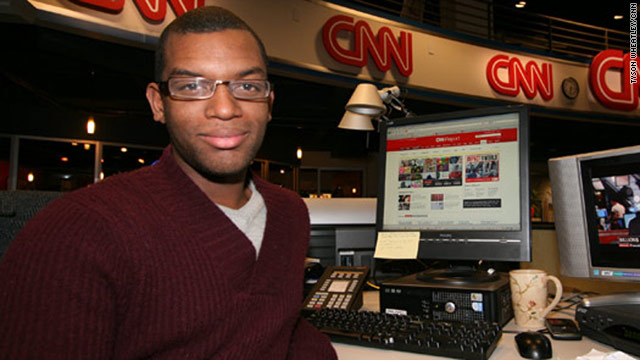 iReporter Jordan Sarver interned with the CNN iReport team in 2010. He now works at an Atlanta TV station.
STORY HIGHLIGHTS

(CNN) -- When CNN iReport was created five years ago, it was intended to be a vehicle for people to share their stories with the world. And it is! But it's become so much more along the way: a community, a teaching tool, a place for collaboration and even a career builder.

We've been thrilled to hear over the years that iReport has been a helpful tool for people looking for jobs in journalism and even other fields. As we kick off our second iReport boot camp, we figured it couldn't hurt to remind everyone that iReporters aspire to great things -- and achieve them.

It's bittersweet when iReporters e-mail us here at CNN to let us know they've accepted a job as a professional journalist. We're thrilled that their careers are blossoming, of course, but we miss their wonderful contributions to our community.

Most recently, we heard from Boston iReporter and recent Emerson College grad Abbey Niezgoda. She accepted a position as a reporter with ABC 6 in Providence, Rhode Island, in July. Niezgoda covered everything from Harvard's Hasty Pudding to roller derbies for CNN iReport, and we're consistently impressed with the professionalism of her work, from her on-camera presence to her editing skills.

Ashley Porter is another Emerson graduate and iReporter who is now working as a TV reporter. She's a multimedia journalist for YNN Austin in Austin, Texas. Her professional quality videos on politics, the economy and life in Boston while she was at Emerson left us with no doubt she'd have a great career ahead of her.

And we can't talk about iReporters who have gotten fabulous jobs without mentioning Trevor Dougherty. At 19, he has a resume that people twice his age would envy. He started iReporting during the 2008 Democratic National Convention, and soon sent videos of news happening all over the world, including Swaziland, where he completed his final year of high school. Dougherty became the youngest American selected to participate at the World Economic Forum in Davos, Switzerland, this year. While there, he was offered a paid internship with Seesmic on-the-spot. In the fall, Dougherty will head to the University of North Carolina at Chapel Hill as a Morehead-Cain scholar. The Morehead-Cain, UNC's most prestigious scholarship, provides a full ride to students demonstrating "moral force of character, scholarship, physical vigor and leadership."

"I owe iReport a lot for helping shape me into the journalist I am today," Niezgoda told us. We, in turn, owe these iReporters for bringing their talents to the iReport community and helping CNN cover stories across the country. We couldn't be happier for them!

When an iReporter becomes a frequent submitter, they reach a sort of semi-celebrity status here at the CNN Center. Their screen name is known by editors and producers throughout the building. Some are even greeted with applause when they come visit the newsroom. And a few get offered a job.

Adriana Maxwell impressed us with her well-informed political commentary when she first became an iReporter in 2008. Since then, she continued to raise the bar, most notably reading the entire Obama health care law (back when it was still just a bill) and posting videos with her thoughts. She was interviewed live on CNN twice, and in July 2010, all that knowledge got her a job as a freelance associate producer at CNN. Since then, she has done everything from generating content ideas to working in the control room, and is currently pursuing a full-time position.

When CNN Tours was hiring, they couldn't do better than iReporter Adam Siegel. Siegel -- of "dancasize" video fame -- has always showed off his fun, outgoing personality in his iReports, even while covering the news. Who better to lead groups of tourists through the CNN Center and show them what we do? Siegel was also a great pinch hitter on the iReport team, always willing to give us a hand when we were short-staffed. We sure do miss him now that he's moved away from Atlanta.

And, of course, we can't forget our CNN iReport interns! James Brierton, a journalism student at the University of Georgia, became our very first intern after impressing us with news and weather iReports from his hometown on Long Island in 2008. He's currently interning with NBC News in New York. This year, he received the 2011 John Holliman Broadcast News Scholarship, which is awarded to a UGA journalism student who exhibits a "passion and commitment to broadcast journalism." We've seen that passion in Brierton from the beginning, and know his career is well on its way.

Our spring 2010 intern, Jordan Sarver, made a name for himself with his political commentary on iReport long before we hired him. He started iReporting during the 2008 election season while studying for a master's degree in journalism at UGA. After his internship with the CNN iReport team, we hired him as a freelancer. He's now working full-time as an area coordinator at 11 Alive TV in Atlanta.

Not just for journalists

CNN iReport isn't just a great career tool for aspiring journalists. Jean Lindsay credits iReporting with helping her find a new job with a college consulting company after being laid off in the 2008 recession.

"The video camera helped me focus and make better presentations to employers. iReport took it that much further because I got feedback from (the community) and ended up on the air several times," she explains in an iReport video that she posted shortly after getting hired. The personality that makes her iReports great and helped her get the job shines through as she gleefully tells the story of how she got an interview.

"When I sent a cover letter, I said I had communications experience, and I mentioned iReporting. It grabbed his attention and I got a phone call fairly quickly," she says.

Her boss, Phil James, who appears in the video with her, is quick to add what she told him during her interview:

"We talked for a couple minutes, and then Jean came out of the blue and said to me, 'You know, I'm a star. I'm on CNN. So if you don't hire me quickly, you're going to lose me, because I know I'm going to make it big-time somewhere,' " he says with a grin.

Are you the next star iReporter? Whether you're an aspiring journalist, an experienced freelancer or someone who just likes to tell a good story, we'd love to have you on the site.

Our CNN iReport boot camp, which is about to begin, is a great place to start. CNN experts will help you choose a story and take you through all the aspects of covering it, from interviewing to visuals to coming up with the perfect headline. At the end of seven weeks, you'll have a finished product -- and the very best one will run with a byline on CNN.com.

The first boot camp module, which discusses how to pick your story, launches Friday. Interested? Learn more on our boot camp main page.