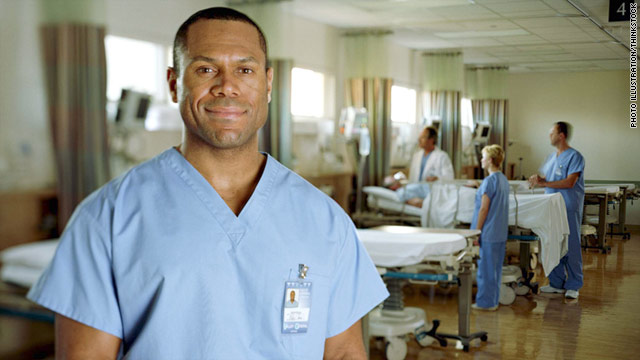 A large number of nurses are expected to retire in the coming decade, leaving room for those entering the profession.
STORY HIGHLIGHTS
RELATED TOPICS

(CareerBuilder.com) -- While there certainly have been positive indicators for employment in 2011 -- The National Association of Colleges and Employers says employers plan to hire 13.5 percent more new college graduates in 2011 than in 2010, and the Federal Reserve predicts that in 2011, the unemployment rate may drop below 9 percent for the first time since April of 2009 -- the job market will continue to be competitive this year.

But pursuing certain occupations will surely provide job seekers with a more fortunate and fruitful return than others. If you're looking for a new job this year, consider honing your skills and applying to a job in one of these 10 occupations, all of which are expected to experience growth this year, and pay more than the national average salary of $43,460.

As the world becomes more dependent on technology, we also become more dependent on those who create it. According to The Conference Board, at the end of 2010, the number of advertised vacancies for computer and mathematical science professionals were at their highest since April 2008.
Salary: $87,553

Occupational therapists help patients regain mental and physical function lost to such causes as arthritis, stroke, cancer or dementia, and will become more in demand as baby boomers age and create a larger elderly population.
Salary: $69,428

Since good salespeople directly contribute to a company's bottom line, they will be a crucial part of the corporate rebuilding process in the next year. The key role salespeople have in keeping business booming also makes the job more stable in uncertain times.
Salary: $111,472

According to the BLS, employment for computer software engineers is expected to grow 32 percent between 2008 and 2018.
Salary: $96,712

CareerBuilder.com: Get the most from a fall-back job

In 2008, truck drivers held more than 3.2 million jobs, making the profession one of the largest in the country. The demand for goods and the need to ship them is not slowing down, either. Nearly 292,000 jobs will be created by 2018, according to the BLS.
Salary: $45,095

As the overall population grows, so will our need for nurses that can provide quality care. Additionally, large numbers of nurses are expected to retire in the coming decade, leaving plenty of room for those entering the profession.
Salary: $72,271

CareerBuilder.com: 7 things you should never say in an interview

The recession has wreaked havoc on personal finances. From those who lost equity in their homes or investment properties, to others who wiped out savings accounts or tapped into retirement funds, Americans will be looking to get their finances back on track this year. As baby boomers begin to retire, the need for financial advisers will only increase.
Salary: $76,688

According to the BLS, physical therapist assistants held nearly twice as many jobs in 2008 than physical therapists, and the profession is supposed to grow much faster than average through 2018. Because training is relatively minimal (only an associate's degree is usually required) and pay is good, it's a great option for those looking for a career change.
Salary: $48,250

*All salary information provided by CBSalary.com.